What do these three images excerpted from Google Earth have in common?

These are the homes in which the acclaimed Baltimore poet, Lizette Woodworth Reese lived a large portion of her adult life. Recently, thanks to the efforts of BCHS member and secretary, Joe Stewart, among others, Miss Reese, who received an honorary doctorate for her poetry from Goucher College, has been admitted into the Maryland Women’s Hall of Fame.

The Pratt Library houses her papers and the Maryland Historical Society’s Underbelly has published a well written and thoughtful account of her life and career from which the following photograph is taken. 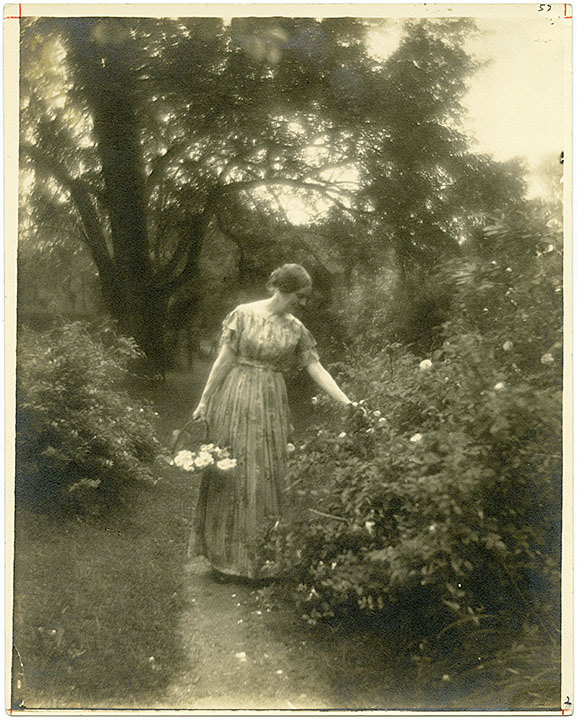 With sharpened gables high in air,

And deep-set lattices, all gay

With massive arch and framework rare;

And o’er it is a silence laid,

That feeling, one grows sore afraid.

The eaves, are dark with heavy vines;

The steep roof wears a coat of moss;

The walls are touched with dim designs

Of shadows moving slow across;

The balconies are damp with weeds

That lift thick as the streamside reeds.

The garden is a loved retreat

Of melancholy flowers, of lone

And wild-mouthed herbs, in companies sweet,

And in its gaps the hoar stone wall

The pebbled paths drag, here and there,

With silver spider-threads —they wear

A silence sad to look upon:

It is so long that happy feet

Made them to thrill with pressure sweet.

The fountain stands where crowd the trees,

HOW human wind its melodies!

For this is all it hath to say

Throughout the livelong summer's day 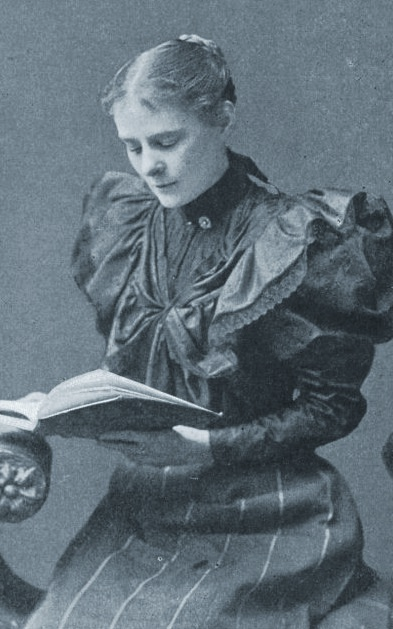 imaged published in the Sun March 15, 1903, pg. 7, background removed; said to be taken some years before;

Lizette Woodworth Reese began teaching at St. John’s Episcopal school in Waverly. She then moved to the public schools of Baltimore City in 1876 to teach at the English German School. In 1889, at the age of 33, she first appears in her own right in the city directory as a teacher living at 1407 North Central Avenue, residing with her parents and brother David In 1896 she transferred to teach at the Colored High School on Saratoga, just east of Charles Street and next door to the Athenaeum, home at the time, to the Maryland Historical Society. 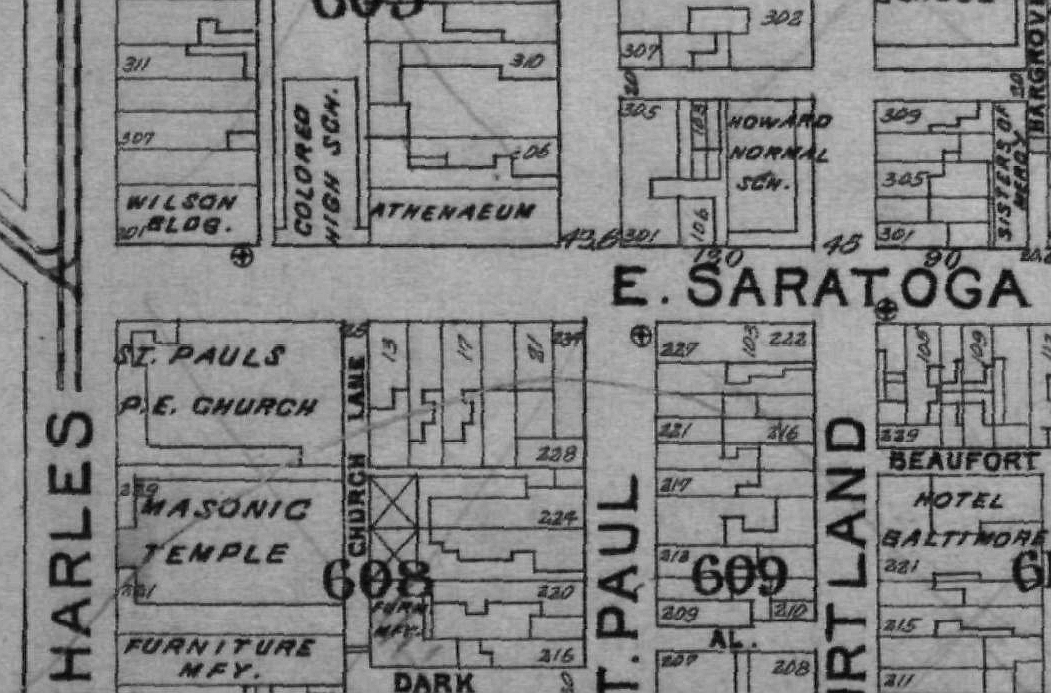 detail from the Bromley Atlas of Baltimore City, 1898

There she taught composition, rhetoric, literature, and physiology until 1901. In 1897 she bought the house at 2613 Atlantic Avenue (now 2109 Kentucky) for $650, the equivalent of her annual salary at the Colored High School. In 1917 she sold the house and moved in with her sisters at 2926 Harford Road, today an assisted living facility overlooking Clifton Park, where she remained until her death in 1935. 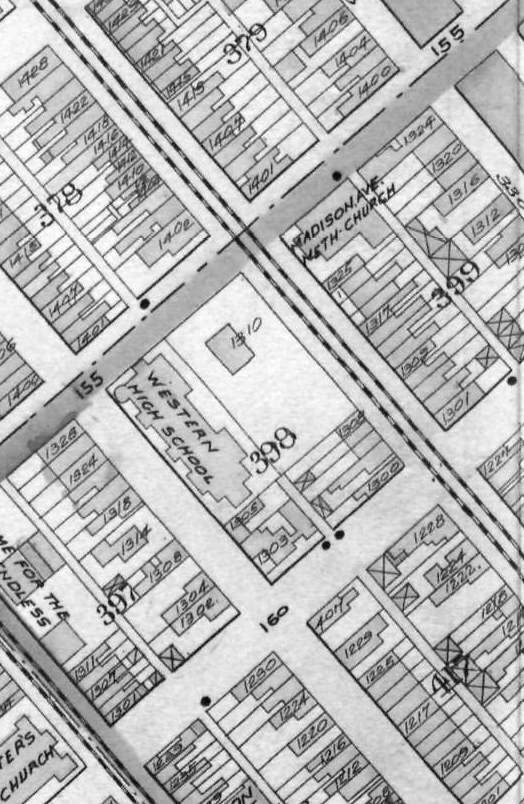 When in 1901 the city finally fulfilled its ‘promise’ to staff all colored schools with colored teachers, Miss Reese was transferred to Western High School, where she remained until her retirement in 1921, after which she devoted herself to writing and reading her poetry. 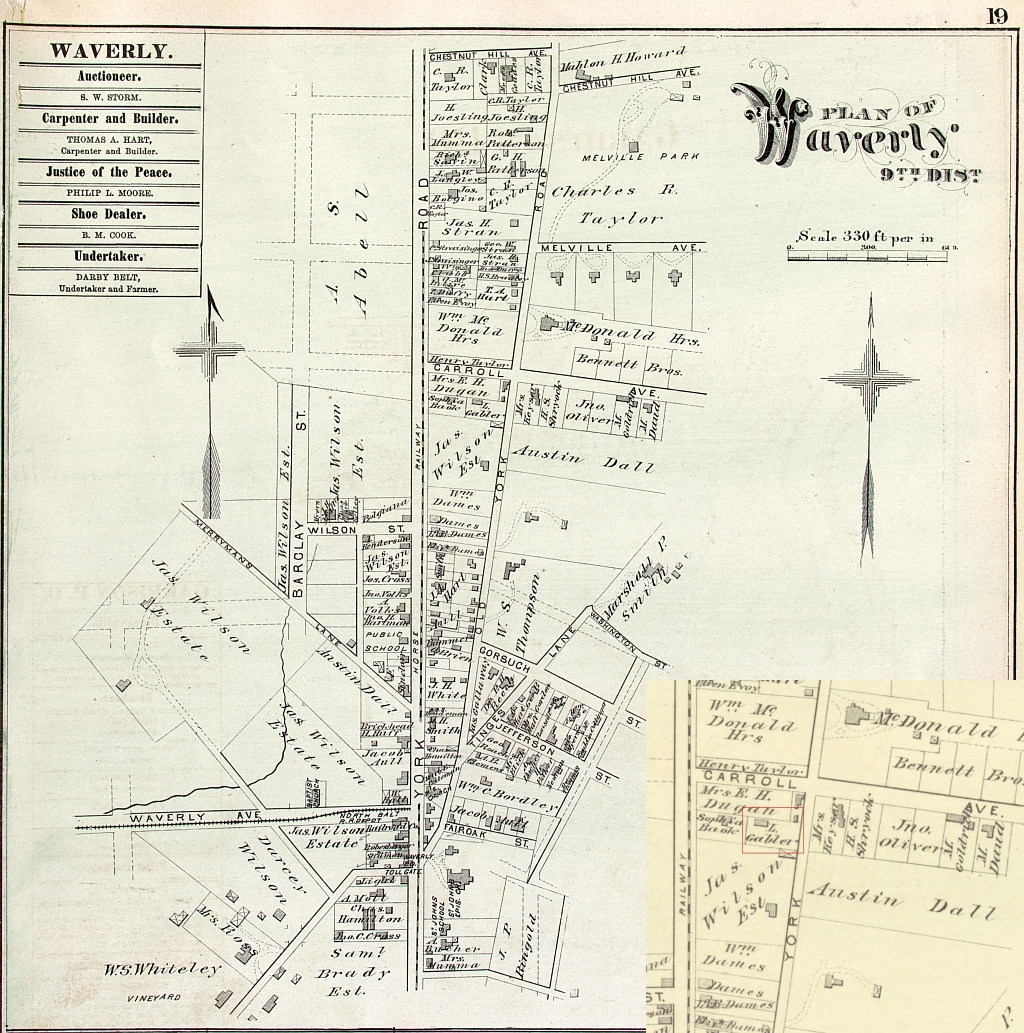 image of an 1877 plan of Waverly, then in Baltimore County, courtesy of Johns Hopkins University, Sheridan Library

Most of her published works reflect on, or are inspired by, her memories of the Waverly neighborhood. As one of the chief advocates for her inclusion to the Maryland Women’s Hall of Fame, BCHS member and recording secretary, Joe Stewart, points out:

Two somewhat biographical books refer to grandparents east of Macdonald estate ( which Abel purchased) which I believe to be slightly north of the then non-existent 33rd Street.

She went to school and later taught at St. Johns (Huntingdon) and was active in that church now called St Johns in the Village on Greenmount at Old York.

A half mile away from the old house [whose house? it reads like "hers"!] stood the toll-gate [that would be the toll-gate close to present day Greenmount and Vineyard across the way from St. Johns. And then writes] For an imaginative child living on the York Road, to wake up and remember the closed toll-gate half a mile below, [suggesting she was half a mile above or north] and the closed one farther up the pike [Govans?] was to have a feeling of safety not to be put into words. ... When I thought, years after, of the pastures in front of my grandfather's house, a line of one of Watts's hymns - "Green fields beyond the swelling flood" - came into my mind. … Opposite stretched a great pasture, curving down into the great western sky...The air was full of prickling half-noises...the shrill of the peacocks across in the Macdonald Farm...But houses go. The town pushes out, and clutches the fair meadowlands, and the uneven lanes are straightened into uniform streets, and the few roofs give way to hundreds, each after the same fashion, and the single shop to a sprawling dozen. And this was the way of the old house. They [her German grandparents?] built a new one on the opposite side of the orchard, and transplanted the white lilac-bushes...It grieved my childish heart to see the enchanted place go, but by this time my parents had moved into the city, and my only glimpse of the devastation were those of occasional week-end visits; being out of sight kept it in part of my mind. … There was never much money; many of this world's goods I went without. But there were always daffodils in the grass in spring, and there were traditions, and books, and plain thinking, and direct speech, and dignity of life and work, and liberty to move about, and grow up in. And which of us can escape beauty, no matter in what guise or

under what name it goes about?

Francis P. O’Neal of the Maryland Historical Society takes the location of her childhood memories even further:

If you go to entry No. 390 in the 1860 census of the Ninth District of Baltimore County, you will see Lizette Reese listed with her maternal grandparents, the Gablers, in Waverly. The question thus becomes ‘Where did the Gablers live?’. On the ‘Plan of Waverly’ which you will find in the 1877 Hopkins’ “Atlas of Baltimore County, Maryland” you will see a house labeled ‘L. Gabler’ just south of the southwest corner of Old York Road and Carroll Ave. This was the home of Louis Gabler, who I suspect (but so far cannot prove) was Lizette’s uncle on her mother’s side. Louis Gabler also showed up in the 1860 census of the Ninth District of Baltimore County; he was listing No. 388, meaning he was pretty close to grandpa Charles Gabler [no. 390] and Lizette. You’d have to root around among the Baltimore County deeds of the period to see if by the time the 1877 atlas was made Louis Gabler had taken over what had been Charles Gabler’s house (although Charles didn’t die until 1880) or whether Louis was at the corner lot all along (i.e. from 1860 through 1877) and Charles had another, nearby, house that isn’t marked on the 1877 Waverly plan. In either case, I’m pretty confident that Lizette grew up around the intersection of Old York Road and Carroll Avenue – which latter today is East 35th Street – since I’ve never found any reason to doubt it.

Indeed if you look closely at the 1877 map, you can see the Louis Gabler’s property extends to another house on Carroll Street which most likely was either Louis’s or Charles’s house. It also may be the property on which “Little Henrietta” died to whom she dedicate “her first long poem” in 1927.

The house itself was a low, mellowed thing,

In part of brick, in part of faded wood;

Set for a century in the four great winds,

Set in its years as in a mist of rain

At edge of twilight, when a narrow sound,

Pricks through each crack of the short, half-lit hour,

Such was its look and with that look was bound

At every chimney, and about each door

That April came when she was four years old,

And passed. And crowding on sad August came.

Picked to the bone our roads lay in the blaze

Of sun. On the cracked hedge a month-olddust

Stuck thick as meal from top-twigs to the roots;

Dropped into a choked well. By the peeling fence

Seen a field’s length across the stretched, hot land.

Blare, silence, draught. Then, of a sudden, Death!

In the same “A Victorian Village,” published in 1929, so clearly based on those memories of growing up in Huntingdon, now Waverly, she also pays glowing tribute to public school teachers, her chosen profession:

A teacher’s work is not obvious; it is often obscure; it is not set to the blare and flourish of trumpets ...In passing a public-school building, every American citizen should feel like uncovering his head, in salute to those within who are spending their span of years in the nobilities and sacrifices of the spacious, most ancient of professions. [quoted in the Sun, June 27, 1942, p.6]

No one will know for certain how many young minds she stimulated by her presentations in the classroom. At the colored high school on Saratoga street, founded by her principal, Reverend George Lewis Staley, 65 of the graduates she taught between 1897 and 1901 are listed by name in the Annual Reports of the Baltimore City School Commissioners. Their biographies have yet to be written, and their neighborhoods remain unidentified.[2] The same is true of the hundreds of women she taught at Western High School, including those she continued to meet with in retirement at her home on Harford road.

For a bibliography of her published work see: Alexander Wirth, Complete Bibliography of Lizette Woodworth Reese, 1937, available on line at http://catalog.hathitrust.org/Record/007921827.

It is perhaps fitting to conclude with Wirth’s flowery tribute to Miss Reese in his introduction:

While singing the praises of a lovely little lady a great fear haunts me lest my effort prove unworthy of her genius. Henry L. Mencken ranked Miss Reese with Edgar Allan Poe, and well he may, for he is not alone in his high tribute. Amy Lowell said that “her ‘Tears’ was as fine a sonnet as any by Elizabeth Barrett Browning.”

[2] one such graduate was Katie Locks. According to the family historian, Mary Katherine Locks (1882-1959), was the granddaughter of John W. Locks, a prominent mortician. She married John Wesley Woodhouse. To date no one has undertaken class histories of the known graduates of the colored high school, or for that matter, individual biographies