What to do with Family Archives: The family life of a forgotten ward boss, and public servant from Baltimore, Wesley Sanders Hanna (1865-1945)

The family life of a forgotten ward politician,

and public servant from Baltimore:

When Judge James F. Schneider and Susan M. Marzetta bought their house at 4510 Roland Avenue, it had been in the Hanna family since 1926. The previous owners had left a considerable amount of effects behind, some of which were sitting in the trash including a pile of water soaked negatives, some in their original paper envelopes from a drugstore at 223 Park Avenue. From the envelopes and a search through city directories, genealogical databases online, and an online atlas of maps relating to the city, it was easily determined that they were produced by someone in the Wesley S. Hanna family (probably the son Charles and the father Wesley) sometime between 1907 and 1913. The photographs salvaged by Judge Schneider are best dated mostly to the years 1906 to 1913 and are centered mostly on the third child, Helen W. Hanna who was three years old when the family moved to East 20th Street. The settings are the street of their 2201 North Charles address where they lived from at least 1900 with his mother-in-law’s family the Raborgs, until 1910, followed by street scenes of their new home at East 20th Street, vacations at Atlantic City, visits to the Druid Hill Park Zoo, and an outing to a related family estate/farm in Howard County owned by the Macy family, once part of a large slave plantation (Bushy Park) owned by the Hammond Family.

There is one damaged negative of what may be the interior of 2201 North Charles taken before their third child, Helen Wesley Hanna was born (1907) which probably dates from about 1906: In 1926 the Hanna family moved into a large Roland Park mansion at 4510 Roland Avenue, built in 1907 by the LeViness family, said to be a duplicate of a house in Salisbury Maryland. There the Wesley Sanders Hanna family remained until 1988 when the house was sold to the Schneiders. Wesley Sanders Hanna died at 4510 Roland Avenue in 1945, and it is from his obituary in the Baltimore Sun that we learn of his public career as a ward heeler in the 12th Ward for the Republican Party, Deputy Comptroller of the City of Baltimore, and State Insurance Commissioner under Governor Harry Whinna Nice.

Wesley S. Hanna, old-line Republican political leader and for eighteen years deputy city comptroller, died last night at his home, 4510 Roland avenue. He had been in failing health for some time, Mr. Hanna resigned as deputy comptroller in 1935 to serve a four-year term as State insurance commissioner in the administration of Governor Nice.

For many years he was a member of the Republican City Committee and party executive of the Twelfth ward. He was a GOP factional adherent of former Senator O. E. Weller.

Mr. Hanna's great-grandfather, Major John Hanna, commanded the Fells Point Light Dragoons in the Battle of North Point during the War of 1812. His maternal great-grandfather, Jacob Small, was Mayor of Baltimore from 1826 to 1831.

His grandfather, William Hanna, was among the organizers of the Republican party when a split in the old Whig party gave birth to the new organization.

Mr. Hanna's father, Charles Fleetwood Hanna, was deputy collector of the Port of Baltimore for more than 50 years, retiring at the age of 83.

The funeral will be on Monday.

A Roman Catholic, Wesley Sanders Hanna (1865/10/6-1945/05/4) was buried in New Cathedral Cemetery and the memory of his public life has largely been forgotten.

The images of the private life of the Wesley Sanders Hanna Family not only illuminate the context and costumes of what might be deemed a nuclear family of the rising white middle class of Baltimore, but also glimpses of the physical world in which they lived and vacationed. For the most part they center around the third child, Helen Wesley Hanna who was three in August 1910 when the family moved to their own house at 212 East 20th Street. 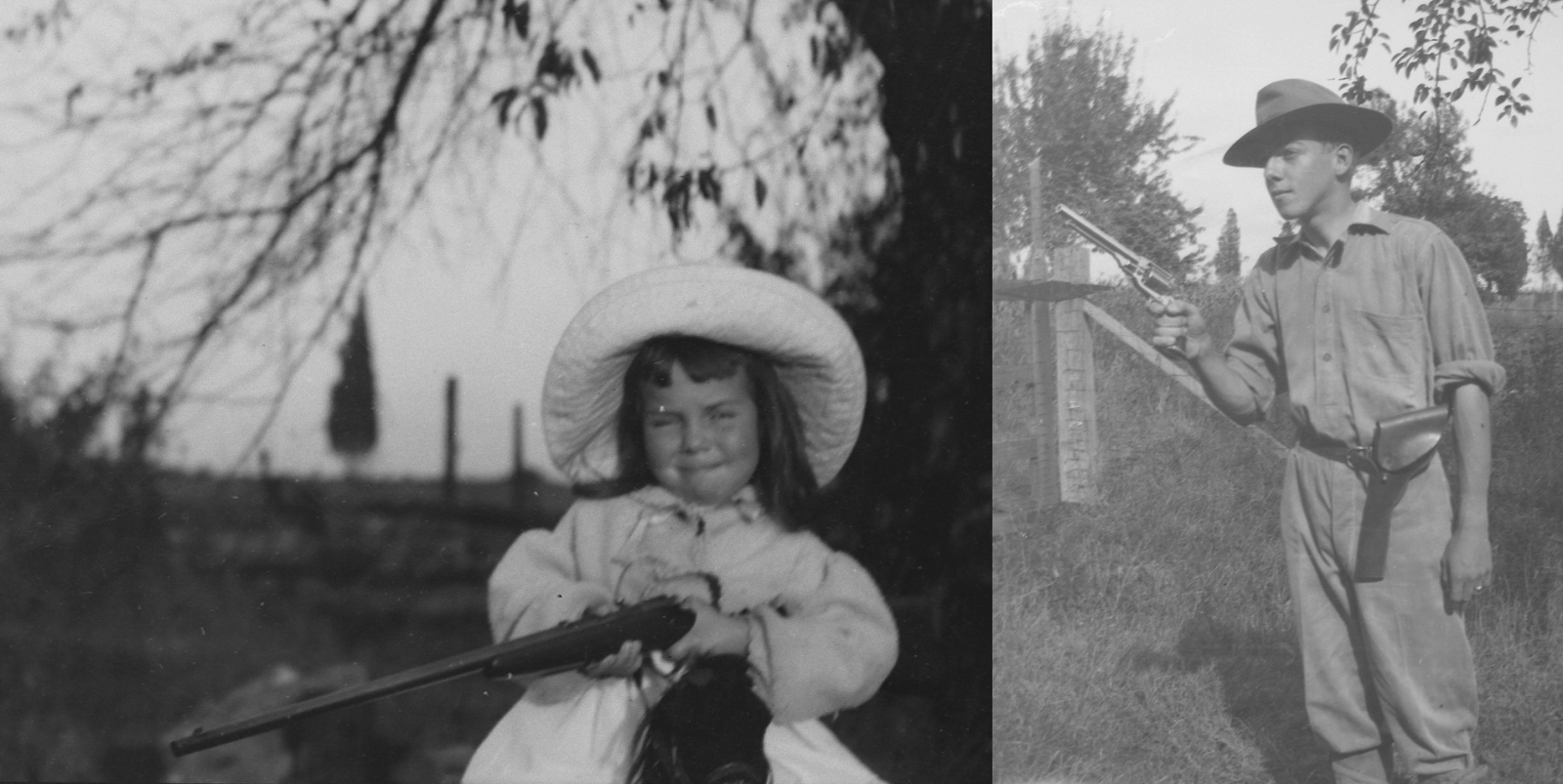 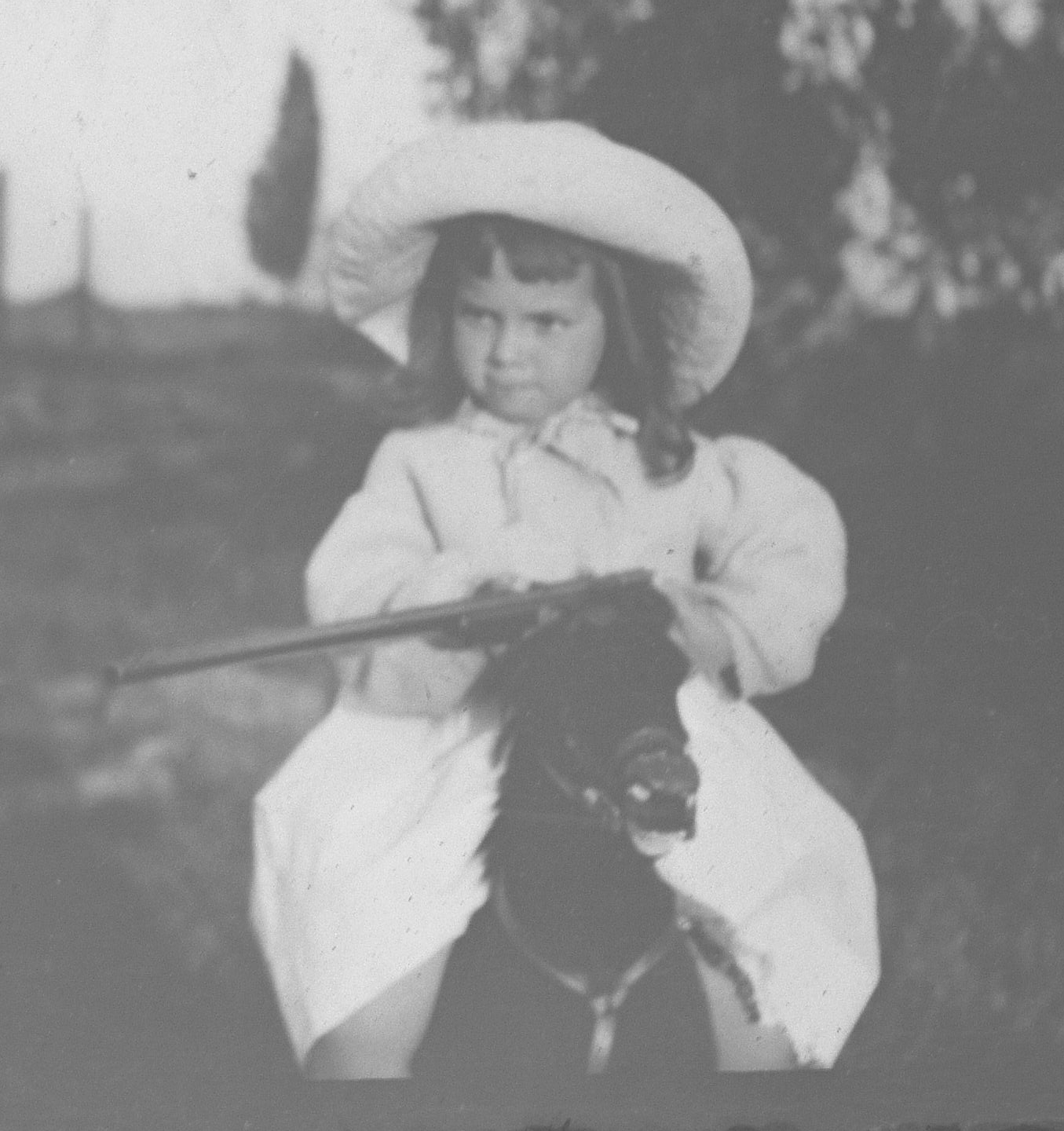 Cowboys (brother Charles) and Cowgirls (Helen) at the Macy farm, Glenwood, ca. 1910 preceded by a lesson on horseback, with an anxious mother to the side. Out for a walk, August 1910, near 2201 Charles Street. Note the Streetcar conductor. Mother and father (Helen and Wesley) on the beach, Atlantic City, Summer of 1909? 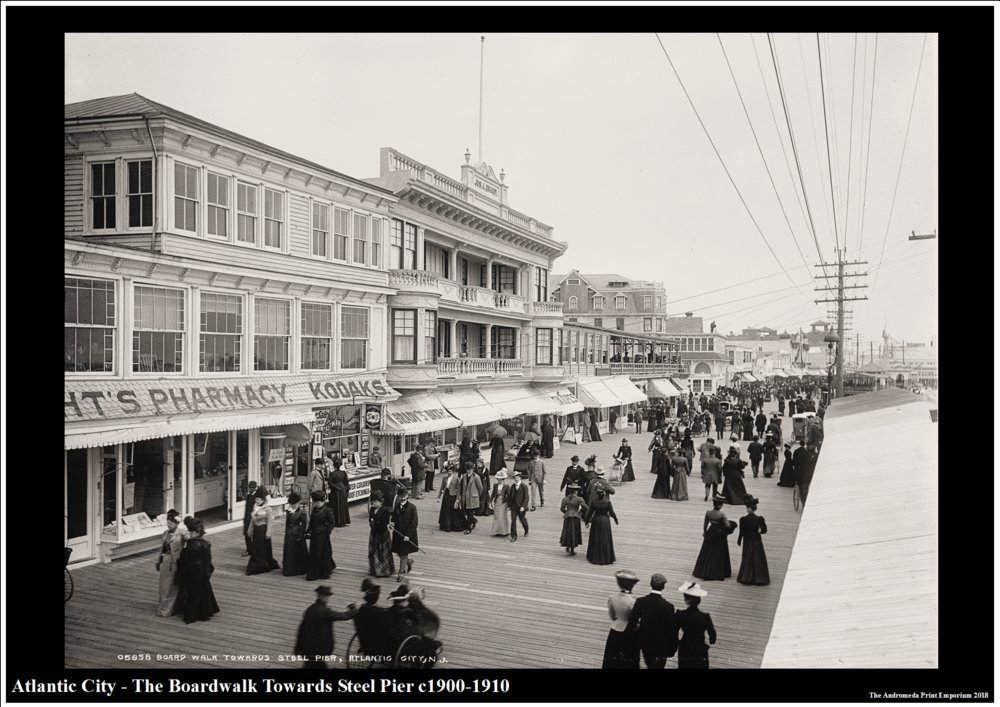 There are a number of people and scenes in the negatives yet to be identified including this puzzle featuring Helen and her parents about 1910. It is of an unidentified church, possibly in the Glenwood area of Howard County. Its architecture is reminiscent of the Lutheran Evangelical Lutheran Church that was just a block away from the Hanna Home on East 20th Street. Perhaps it was built by the same Architect? 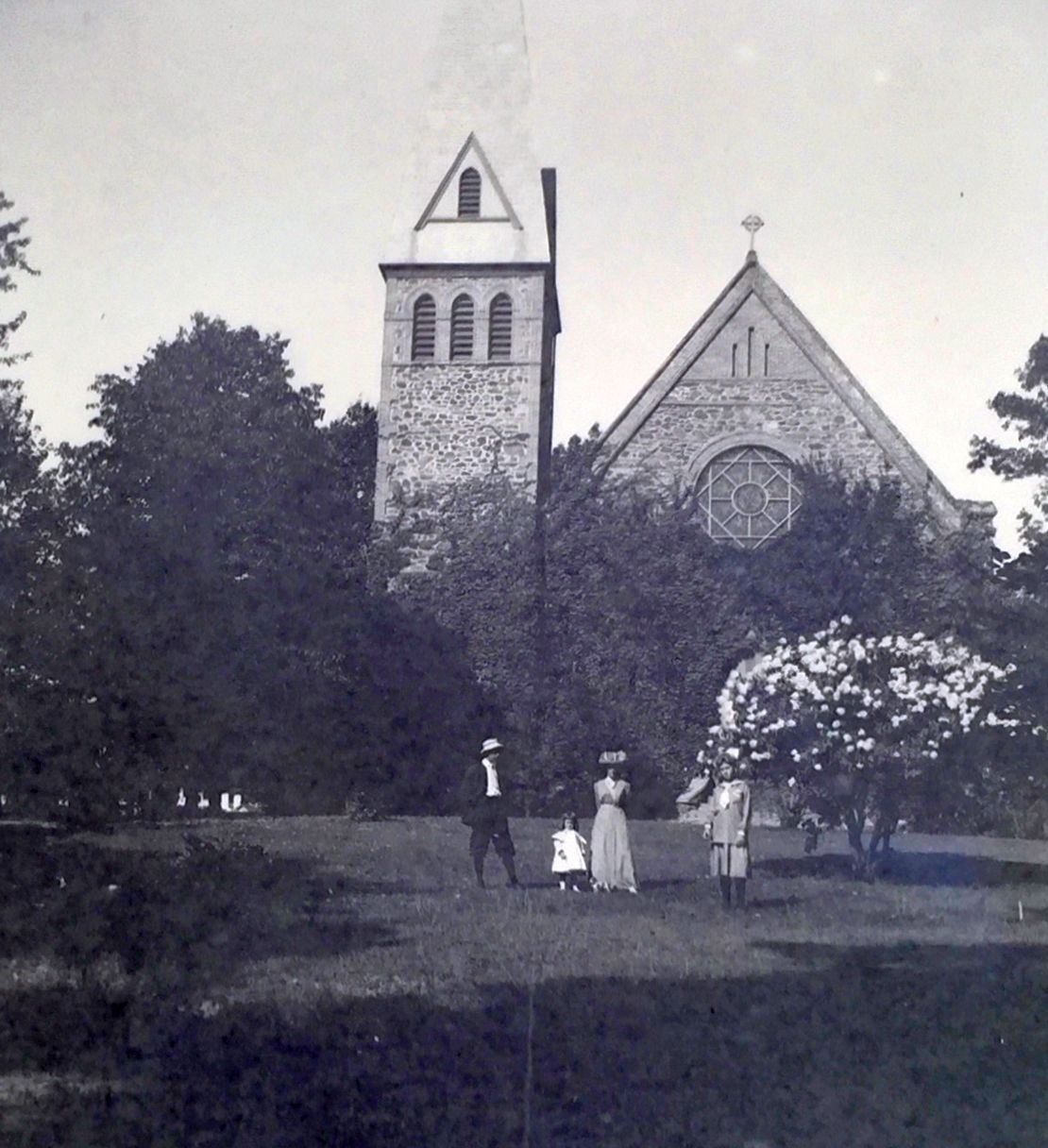 Where is this church? Look closely as it is Helen, her mother, brother and sister taken in what appears to be July or August 1910 (the Crepe Myrtle is in full bloom), probably taken by Wesley Sanders Hanna and from Helen’s appearance very near to the time of Helen’s walk on Charles and East 20th street in the images featured above.

Today the East 20th Street neighborhood of the Hanna’s is literally no more. The block of houses in which the Hanna’s purchased their first Baltimore home is now the basketball court of the Dallas F. Nicholas, Sr., Elementary School, but from 1910 to 1926 it was the home of the Deputy Comptroller of the City of Baltimore and State Republican Party Committeeman from the 12th Ward in which East 20th Street was located. 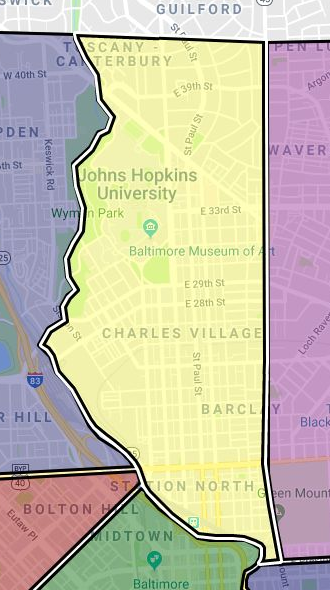 Perhaps someday more will be written about Wesley Sanders Hanna, his family and his public world, as well as about the two white servants in the Raborg household at 2201 North Charles before 1910 who waited on them, Lucie Nickens and Lillie Cassell. At the new home East 20th Street, they had no servants, although it is probable that they hired daily help to cook, clean, and wash their clothes.

As to Helen Wesley Hanna (1906/o7/29-1990/05/07), the little girl featured in most of the negatives, she moved with the family to the Roland Park house in 1926, married Frederick C. Williamson (1900/05/17-1979/03) from Indiana who she brought to 4510 Roland Avenue, where she continued to live until two years before her death. Throughout her life except perhaps the years on East 20th Street (1910-1926) she lived within what might be called a family compound. For her first three years she lived with her parents, siblings, servants, and Raborg grandparents in the grandparents home on Charles Street. After 1926 she lived with her parents, her cousins families including one Raborg cousin who was born in Brazil, and her Williamson husband at 4510 Roland Avenue. Apart from the charming photos of a child of a middle class white urban household, and the scenes of the city and country around her, her story is unknown, yet by knowing what we do now, we have a significant new insight into the nature of a rising (economically) middle class urban family life that was not as nuclear as it might have been thought to be.

Apart from the historical interest and the stories to be derived from an appraisal of this nearly castaway family collection of photographic negatives, the moral of this account lies in the asking of what to do with the collections of family papers and memorabilia that often occurs on the removal to a retirement home, or death of the family member that was for whatever reason the custodian. The normal response is 1-800-got junk (or something similar) but it would benefit understanding of ourselves and enrich the stories about our private and public worlds if there were a helping hand to save and care for what has survived in a well-inventoried online environment and a safe and secure storage facility. This small collection and its online access will be at the Baltimore City Archives as BMS 48_21, the James F. Schneider Collection. Guidelines for what to and how to go about doing it can also be obtained from one of the volunteers at the Baltimore City Archives, including instructions on the basic procedures for ‘containerizing’ and inventorying the family archives. I am hoping there are a lot more Jim Schneiders and Ernie Dimlers out there who are willing to give or share what they have inherited or have collected.

Comments, additions and corrections are most welcome.