Over the past few years my research assistants and I have focused on citizen participation in the defense of Baltimore in the summer and fall of 1814. What follows is an essay on the blockading of the entrance to Baltimore Harbor that I asked Charles Weisenberger to write as he came to the end of his internship with me in 2012.

The best overall book on the defense of Baltimore in 1814 is The Rockets' Red Glare, the Maritime Defense of Baltimore in 1814 by Scott S. Sheads with a foreword by Walter Lord (Centreville, Md: Tidewater Publishers, 1986). Scott assisted Charles in identifying the vessels sunk across the mouth of the harbor and our objective in the forthcoming study of Baltimore in 1814 is to document the lives of those merchants and owners whose ships were sunk in the City's defense. The image used below is taken from another excellent illustrated resource on the history of the war of 1812 in the Chesapeake, In Full Glory Reflected, Discovering the War of 1812 in the Chesapeake by Ralph E. Eshelman and Burton K. Kummerow (Baltimore: Maryland Historical Society Press, 2012): p. 141. No one interested in the history of the War of 1812 as it affected Maryland and the nation should be without either book.

1814: Defending the Harbor of Baltimore:

by Charles Weisenberger and Ed Papenfuse 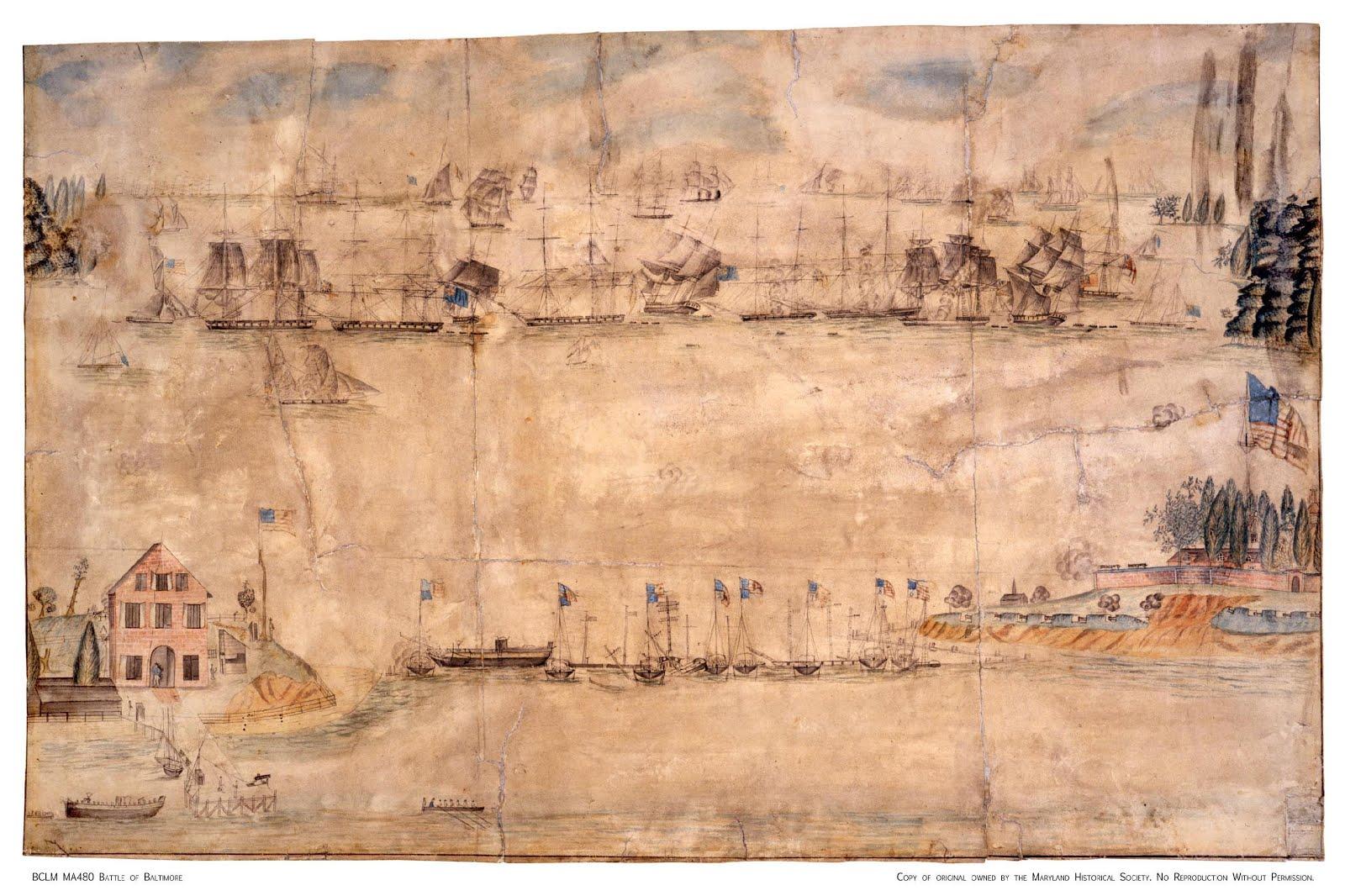 “…it was evident to all that the obstruction of the Channel was the greatest,

if not the only real preservation of the City of Baltimore…”

Within the War of 1812 collections of the Maryland Historical Society is a most revealing and interesting view of the bombardment of Fort McHenry showing the sunken vessels, U.S. gunboats and the Lazaretto Battery. In the near distance the British bombardment squadron is seen along with the flagships of Vice-Admiral Alexander Cochrane (HMS Surprise) and Rear-Admiral George Cockburn (HMS Severn). In tow astern of the Surprise is the American flag-of-truce sloop-packet the President, Captain Grey.

In September 9, 1901 a Baltimore Sun reporter visited the home of Mr. Robert W. MacCubbin, Sr. (1812-1904) and was shown a watercolor of the bombardment of Fort McHenry. The sheet measured approximately 20” x 24” with a view taken from Federal Hill looking down river towards Fort McHenry. It was painted by a Lieutenant Henry Fisher who served in Captain Daniel Schwartzauer’s company of the 27th Maryland Regiment that had fought at North Point. Lt. Fisher painted it one month after the battle and presented it to Moses Maccubbin a private in Captain Joseph Hopper Nicholson’s U.S. Volunteers, the Baltimore Fencibles who were in the Star Fort during the bombardment. Beneath the picture is found the following inscription:

“A view of bombardment of Fort McHenry by “the British fleet under the commands of admirals Cochrane and Cockburn on the morning of 13th September, 1814, which lasted 24 hours. Thrown from 1500 to 1800 shells. In the night attempted to land by forcing a passage up the Ferry Branch, but were repulsed with great loss.”

Amidst the “the rockets’ red glare, the bombs bursting in air…” over Fort McHenry this October 1814 watercolor vividly provides the only known contemporary visual account of the gun barges, sunken vessels and a chain-mast boom defending the harbor entrance. It captures the moment at 9:00 a.m. on the morning of September 14, 1814, as the morning gun was fired, the forts garrison flag raised, Yankee Doodle played and the British squadron unfurling their sails down the Patapsco River. How these shore defenses and additional obstructions came to be and their role during the bombardment are stories that have been left untold of the “perilous fight.”

On February 5, 1813, nineteen months before the British established a naval blockade of the Delaware and Chesapeake bays that would be enforced for the remainder of the war. In the aftermath of the British naval depredations on the upper bay at Havre-de-Grace, Elkton, Georgetown and Frenchtown, a bill was presented to the Maryland General Assembly entitled “An Act for the building of barges for the defense of the Chesapeake Bay.” It failed to be passed with a vote of 15-49. on May 28, 1813 and “so the barges were sunk.” On July 16 a similar bill, introduced by U.S. Senator Samuel Smith, was passed by Congress “An Act, providing for the further defense of the ports and harbors of the United States” authorizing the President

“…to cause to be hired or purchased, hulks, or other means of impediment to the entrance of the ships or vessels of the enemy, to be sunk, with the consent of the proper authority of the state…to defray any expense incurred a sum of $250,000 was appropriated to be paid out of any monies in the [U.S.] treasury...”

Additionally barges were to be armed, equipped and manned of a size not less than forty-five feet long and to carry heavy guns.

In August 1813, the British established a brief strategic naval base on Kent Island directly across the bay from the Patapsco River. With eighteen British warships within striking distance, General Smith caused a number of merchant vessels to be prepared for sinking, head to stern, from Fort McHenry to the Lazaretto Point to be held ready at a moments notice by their owners.

In March 1814, a city ordinance was passed empowering the port warden to remove all vessels that may be sunk for the harbor defense. On August 25 in the aftermath of the capture of Washington, Baltimore’s Committee of Vigilance and Safety ordered the vessels moved below Harris’s Creek for the security of the harbor entrance. The arrival of Commodore John Rodgers naval brigade of 350 U.S. Marines and seamen from Philadelphia’s frigate Guerriere, thereupon fell the responsibility for sinking the merchant vessels. Smith instructed Rodgers to sink the vessels to be enacted by the senior officer of the U.S. Chesapeake Flotilla Lieutenant Solomon Rutter. Sailing Master Beverly Diggs commander of Barge No. 7 of the flotilla received orders on September 12th to blockade the channel. In a deposition Diggs stated he

“…took three vessels, towed them down, and sunk them agreeable to orders; such was the haste in which they were required to perform this duty, that no time was taken or any attempts made to save the Articles that might have been on board, or even to ascertain to whom the vessels belong, that at the time of Sinking the third vessel by the Crew of the Deponents Barge it was deemed proper to take an Ax & after careening the vessel cut a hole in her Bottom, let her right & sink. The Enemy having their Bomb Ships moored & Commencing the Bombardment…as it was evident to all that the obstruction of the Channels was the greatest, if not the only real preservation of the City of Baltimore…”

Captain of the fleet Rear-Admiral Edward Codrington informed Vice-Admiral Alexander Cochrane: “We cannot pass the fort, because I find the enemy have sunk hulks between the fort and Gorsuch’s [Lazaretto] Point. So that the channel is completely closed…” It would be these barges and the sunken vessels that ultimately would be Cochrane’s decision to forego the continuance of any strategy to force a passage past the Star Fort.

In the left foreground one may see Captain Edward Trippe’s steamboat Chesapeake, to move forward or astern to allow U.S. gunboats to move through the blockade. The Chesapeakepresented her white starboard wheelhouse with the inscription CHESAPEAKE UNION LINE towards the British fleet. Each barge was numbered with a corresponding numeral white flag under the American flag. Thomas Galloway, a professional painter was paid $2.50 each for the task.

Another effective defense measure was the placement of a chain-mast boom across the northwest channel. On May 4, 1813, Captain Solomon Rutter was ordered

“…to lay booms of old or new masts connected by strong iron chains and bolts riveted through the ends of each mast from the shore of Gorsuch [Lazaretto] Point to the shore on Whetstone Point, supported by anchors or poles at each end, and [to extend] in front of the Marine Battery, at a distance of 150 yards from the shore, to extend to the steep bank [on the Ferry Branch]…”

The boom consisted of 70-feet long and 24-inches thick ships’ masts and logs and spars stretched from the Lazaretto Point, across the channel to Fort McHenry and around the western shore to the Ferry Point.

In March 1815, Colonel Paul Bentalou, Baltimore’s Quarter-Master General and John Barney, Deputy Quarter Master was given the duty of raising the vessels and delivery to their owners. He found many of the vessels “fifthly in the extreme, being covered and partly loaded with mud…and unfit to go to sea again.” To assist him in raising eleven of the twenty-four were Captains Geohegan, George Stiles, Master Riggers William Bartscher, John Tillard and Rene Le Moaitre and the men under their command.

After the remaining vessels were raised ship builders William Price and Eli Despeaux were chosen to provide an estimate of the vessels damages gave depositions the vessels sunk “were depreciated to the amount of one-third there actual value.” The vessels “all of them were more or less swelled, strained, or burst in the hull, and their masts and upper works were much cut and broken by ice …by their settling in the mud at the bottom of the river. Several of the vessels were not raised for a period six to nine months being immersed in the muddy waters and when examined at their shipyards were found un-repairable.” Soon thereafter applications were made for Congressional compensation for damages incurred with other depositions by ship-chandler Thorndick Chase, ship joiner John Snyder and ship carpenter James Cordery.

Twenty-Four Vessels Sunk for the Defense of Baltimore

The actual reimbursements to the owners or those who claimed for them by 1837 were considerably more than what was listed in 1830 as appears from the records of claims in the the National Archives, RG217, 742-3-1070-1087. Ultimately patriotism paid handsomely for the use of the ships in the harbor blockade: