Hanged and Burned in Effigy by the Citizens of Baltimore 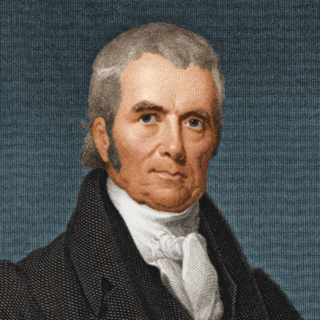 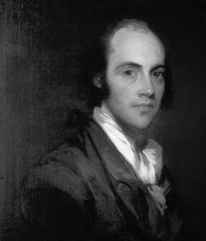 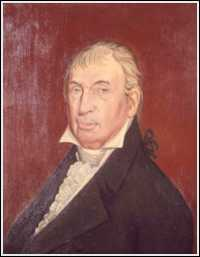 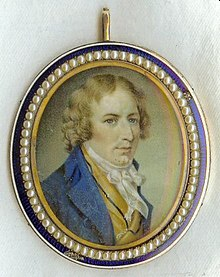 The last and only Vice President of the United States to be hanged in effigy was Aaron Burr, along with two other notables and one not so notable. The notables were Chief Justice John Marshall, former Vice President Aaron Burr, and Marylander Luther Martin, one of Burr’s lawyers at his trial for treason in Richmond, Virginia where Burr had been found not guilty. The not so notable individual was Harman Blennerhassett, who was made famous by prosecutor William Wirt’s speech to the jury in which he asked “Who is Blennerhassett?”. Wirt was born in Maryland and after the Burr Trial moved his practice to Baltimore. 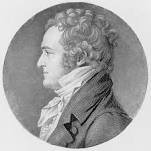 Curiously another of Burr’s lawyers, Marylander Robert Goodloe Harper was not hanged in effigy, even though he, like Luther Martin, vigorously defended Burr at his trial for treason. 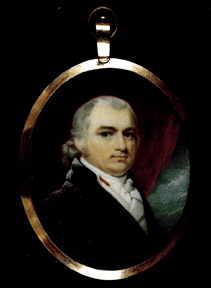 The story of the events leading up to the hangings in absentia on Gallows Hill has been told repeatedly by historians, although they are mistaken with regard to the site of the hangings and bonfire.[1] The burning of the effigies took place on Gallows Hill at the intersection of Chase, Asquith, and Harford Road where there is a triangle of land with a substantial tree, but no marker to indicate that it was the site of public hangings, symbolic or otherwise. In 1937 an article in the Baltimore Sun (August 22, 1937), indicated that it was the custom to execute convicted criminals there from at least 1830 until 1842 when hangings were transferred to the grounds of the city jail, but apart from the symbolic hanging of Burr and friends, no evidence could be found of any earlier gibbeting on the site.

The return of Luther Martin on Sunday, November 1, 1807 to Baltimore, and the publication of his letter the following day defending his actions as Burr’s counsel, provoked a response that evening from a militia company led by Captain Leonard Frailey who had recently lost the election as Sheriff of Baltimore[2].

When Frailey and his company arrived Martin was entertaining Arron Burr, Harman Blannerhasset, and Samuel Swartwout, a close friend of Burr’s.[3] They did little but array themselves before Martin’s house on Charles Street with bayonets charged, and playing the contemporary version of “Rogues March.” 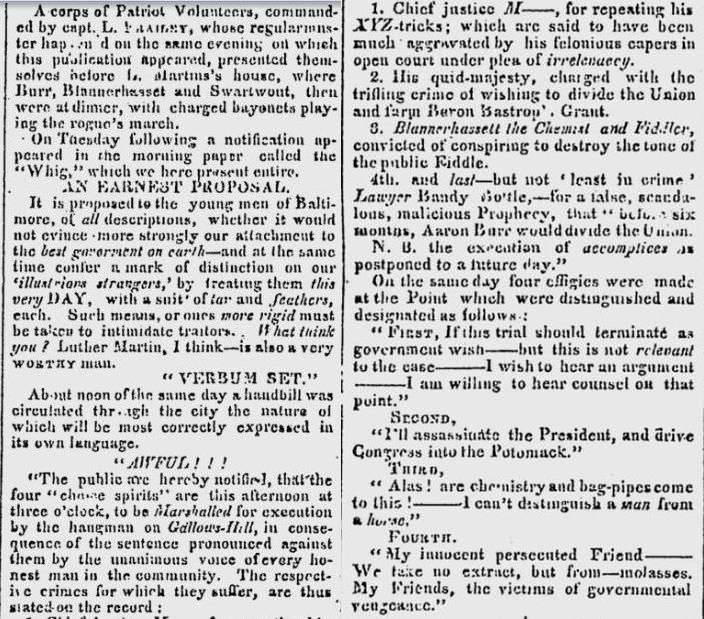 from the Baltimore Whig in the Brooklyn Minerva, and Long-Island Advertiser [Brooklyn, NY],

The next day, Tuesday, November 3, however, the mob under another militia captain, James Biays, the political boss of Fells Point, oversaw an effigy hanging and burning on Gallows Hill encouraged by the circulation of a handbill headlined “Awful!!!”. As far as Luther Martin was concerned Baltimore was clearly earning the reputation as America’s “Mobtown” and he warned against it: 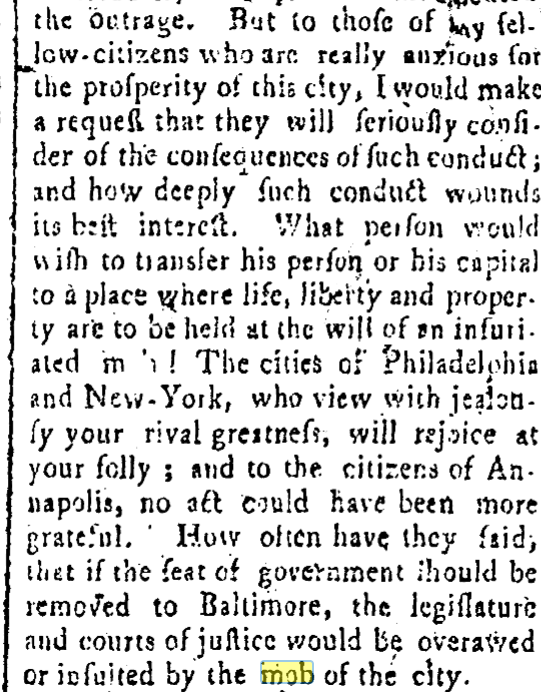 When exactly Baltimore became known nationwide as “mobtown” is not clear, but as Josh Cutler points out in Mobtown Massacre, Baltimore sealed that fate in 1812 with the mob’s attack on Alexander Contee Hanson (later a U. S. Senator from Maryland) and the destruction of Hanson’s printing press in Baltimore.[5]

[1] For example see: the otherwise excellent and accurate study by Charles G. Steffen, The Mechanics of Baltimore: Workers and Politics in the Age of Revolution 1763-1812. Urbana Chicago: University of Illinois Press, 1984., pp. 232 ff.

[2] Leonard Frailey (1781-1864) was a captain in Peter Little’s militia company of the 39th regiment in 1807 (Federal Gazette, August 12, 1807). He served in the War of 1812, and was known as an “Old Defender”. He is buried along with seven of his 14 children in Greenmount Cemetery, Baltimore. Scott Sheads has researched and written about his demonstration before Luther Martin’s house and his service during the War of 1812. See Scott Sheads article in the Maryland Historical Magazine, The Last Old Defenders of 1814, p. 123 ff. Scott has also written a short biographical sketch of Leonard Frailey in which he notes that Frailey was a printer by trade whose service in the militia included the drilling of the 3rd Brigade “and placing them in condition for actual service” in the defense of Baltimore in 1814.

[3] Burr and his colleagues passed through Georgetown and Washington, D.C. on their way to Baltimore on Sunday, November 1, 1807. See the National Intelligencer and Washington Advertiser, November 4, 1807.

[4] See also the Federal Gazette& Baltimore Daily Advertiser, November 24, 1807, for a scathing review of Frailey’s involvement in the demonstrations before Luther Martin’s house on November 2, 1807. “...Thus we are taught that the military may come forward in their military character, whenever any captain thinks proper, for the purpose of disorganization.--That any captain of a company, without consulting his superior officers, much less the Civil Authority, may call out his company in arms, --march them in a body, in military array, and given them military orders, in their military character, to insult their fellow citizens, and to injure, to the utmost of their power, their good name, fame and reputation! ...Where we are under the empire of the laws only! -Away with ye, ye phrasaical preachers of liberty, --ye who can strain at a gnat and yet swallow a camel!, or in other words he who can gulp down this doctrine, must have a stomach like that of an ostrich, which, naturalists say, can digest a ten-penny nail”.