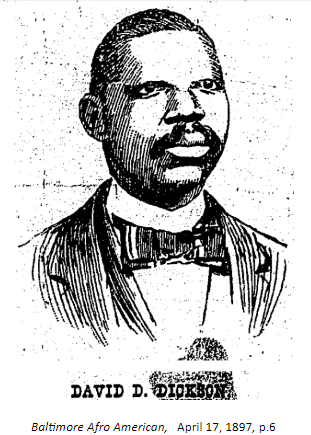 Monday, January 4, 1886 witnessed the dedication ceremonies of the Enoch Pratt Free Library of Baltimore City. This notable event marked the beginning of a philosophy of service and education that was to leave an impact throughout the country in the years to come. On one hand, it was a departure from the usual concept yet, on the other, it followed the tradition of philanthropy that had been characteristic of Baltimore’s citizens of achievement and wealth. Enoch Pratt had stipulated that “The Library shall be for all, rich and poor, without distinction of race, or color, who when properly accredited, can take out the books if they will handle them carefully and return them.”[1]

Among the invited guests at the ceremonies were “several of Baltimore’s prominent colored citizens.”[2] One of the individuals noted was a Mr. D. Dickson who held the responsible position of janitor of the building. [3] The Library payroll for February 1885 only notes his salary of $30 per month. So who was this man, credited with such responsibility and apparently not unknown to the citizens of Baltimore’s black and white communities?

Originally from Norfolk Virginia, where he was born March 6, 1854, his family moved to Baltimore when he was quite young, probably in the late 1860’s. He entered the public schools and mastered all of the studies then available at the colored grammar school, which at that time was the highest school for black youth. A city ordinance of 1867 granted authorization for the establishment of public schools for black children, [4] but not until1883 were high school grades for blacks an actuality.[5] Dickson continued his studies on his own, probably aided in part by his cousin, Samuel Servent, who though a few years younger, was a private teacher. Described as coming from a “family possessing some degree of latent ability,”[6] it is no wonder that Dickson exhibited such an intense interest in and desire for knowledge and became active in literary, business and political circles.

David and his cousin shared the same address in 1878. By 1880, they had moved to 32 Tyson Street. Also in that same household was Samuel’s sister Ruth and their mother, Rachel, both laundresses. [7] By 1881, Dickson was using a middle initial, the third D, and had his own business, a confectionery store. The next decade was to be an intensely active and significant one for him. Two major desires evolved and came to fruition. One was to practice law and the other was to enter into political life in order “to consider the educational, industrial and political advancement and interest of our race.” [8]

One example of his early civic involvements was the 1880 Equal Rights Convention held in Baltimore on February 10. At that time, blacks comprised 16% of the city’s population, surpassed only by New Orleans and Washington, D.C. Statewide; the black population was almost 22.5% of Maryland residents. Five delegates, representing each ward were to assemble and to plan strategy in the interest of greater recognition of the politics of the state. After settling differences regarding contesting delegations, the convention elected permanent officers, appointed committees and adjourned with instructions to organize for active work within their wards.

Another example was an 1881 petition to the Mayor and City Council of Baltimore on behalf of the Colored Aged Men and Women’s Home on Lee Street between Howard and Sharp Streets. Dependent on the charity of the public, the Home, which at that time housed twenty- three inmates, was in need. Among the fifty one signed petitioners asking for $1,000 was D.D.Dickson.[9]

By the mid-1800’s, Dickson had helped to form several literary societies, worked as Baltimore’s correspondent to the New York Freeman and also wrote for the Maryland Director. He was one of the three elected vice presidents at the Maryland Literary Convention held in Baltimore the 16th of October 1885. Participation in societies such as the Monumental Literary Club plus his journalistic experiences no doubt honed his skills as an orator and a writer.

Dickson’s interest in law never waned. In 1885, together with several other Baltimoreans, he attempted to persuade Richard T. Greener, holder of a law degree, to open a law school in Baltimore.[10] A month earlier, in March, a historic ruling had paved the way for blacks aspiring to the legal profession. The Supreme Bench of Baltimore agreed in the case of Charles S. Wilson that an applicant to the Bar, “is not to be debarred by reason of his color.” [11] Although Wilson failed to qualify, Everett J. Waring, a graduate of Howard University and a member of the Bar of the District of Columbia, did qualify on October 10. 1885 and thus became the first black attorney to practice in Baltimore. In June, Dickson had resigned his position with the Maryland Director in order to devote more time to the study of law. Before he realized that particular dream, three other fateful events took place.

In 1884, he had married a young lady several years his junior. Her name was Georgianna and she was born in Alabama.[12] November of that same year, he was working in the Enoch Pratt Free Library under the direction of Dr. Lewis H. Steiner. The Board of Trustees who did the hiring were: Enoch Pratt, George William Brown, Nathaniel H. Morison, Henry Janes, Charles J. Bonaparte, George B. Cole, Edward Stabler, Jr., James A. Gary and John W. McCoy. As janitor, Dickson’s living rooms were in the rear of the building on Mulberry Street. His tenure at the Library allowed easy access to resources for his self-education, especially in his pursuit of law studies. One of Dickson’s colleagues was the second black employee hired – William A. Williams (sometimes spelled Willyams). Williams, noted for his linguistic abilities, [13] had obtained a Ph.D. at Rome from De Propaganda Fide and tutored Dickson in the French language. As more and more demands were made on Dickson’s time and talents, he resigned from his post at Pratt Library and by 1886 had once again opened a confectionery store, this time at 402 Druid Hill Avenue. His business efforts, expert penmanship and skill in calligraphy (noted in city directories as card writing) were lauded by his contempora- ries.[14]

It was the third event that brought David D. Dickson to the national political scene. On May 17, 1888, the Maryland Republican Convention met in Easton, Maryland. Among the prominent participants was James A. Gary. Four delegates-at-large to the national convention were to be chosen. A Baltimore dentist, Dr. W. A. Montell, in an eloquent speech, nominated Dickson. He was seconded by S.Q. Sanks, a black man from Baltimore, who vigorously praised Dickson by saying that he “represented the advance- ment and progress of the colored race.”[15] The Baltimore Morning Herald described Dickson as a “recognized leader of his race, who has for the last 15 years taken an active part in politics and is considered one of the most intelligent colored men in the city.”[16]

Dickson believed in his party’s victory and minced no words when he denounced fraud at the polls. [17] In anticipation of a Republican victory, he prepared his papers to apply for appointment as minister resident and consul general to Haiti. The salary was $5,000 a year. [18] Benjamin Harrison, the Republican presidential candidate, won the 1888 election. He had lost the popular vote, but he carried the Electoral College vote. And so in spring of 1889 office seekers were literally on his doorsteps at the White House. Dickson was no exception, seeking “national recognition for the 50,000 colored voters of Maryland.”[19] Testimonials for Dickson crossed geographical, political and racial lines. He was described as a man of ability, a “gentleman of much worth and influence in Baltimore City, intelligent, industrious, a loyal Republican and possessing high character.”[20] One of the more intriguing letters was from the Chairman of the Republican Campaign Committee, William T. Henderson. Beneath his testimonial was neatly penned the following: “I concur in speaking well of this applicant and although of different politics, I recommend him on his own standing, as a man” signed by Wm. Pinkney Whyte. Whyte was a former Governor of Maryland, a former mayor of Baltimore and in time also served as an Attorney General for the State of Maryland. The list of testimonials, a veritable Who’s Who, included: Enoch Pratt, James A. Gary, Rev. Charles W. Mossell (at one time missionary to Haiti), William A. Willyams, Joseph S. Davis (one of the early black attorneys in Maryland), John Sherman (U.S. Senator from Ohio), William D. Burchinal (Surveyor of Customs). In this quest, Dickson was unsuccessful. The appointment went to Frederick Douglass.

In 1890 Dickson took the Civil Service examination and passed at the head of his class. He was hired as weigher for the customs house, a position he was to hold through 1894. In July of 1891, Dickson once again applied for the ministry to Haiti. Again his request was denied. Less than a year later, Dickson did realize one of his goals. On May 31, 1892, by then an instructor and weigher in the Custom House in Baltimore, he was admitted to the Bar by the Supreme Bench of Baltimore.[21] It had not been an easy road for him or for any of the others in a highly selective legal fraternity. In June of 1899, hopes were raised as the first two black students, Harry S. Cummings and Charles W. Johnson, graduated from the University of Maryland’s Law School. By the summer of 1890, two other black students, W. Ashbie Hawkins and John L. Dozier, were told to leave because white students of the law, medical and dental departments protested their presence.[22] This setback did not deter Dickson and finally after years of private study and persistence, he became one of the first ten practicing black attorneys in the city of Baltimore. In 1895 he opened his office at 213 North Calvert Street, subsequently relocating to 231 Courtland Street.

Political fever struck again when in May 1901, he tried to gain a seat on the City Council. Running as an Independent Republican, he made a poor showing, garnering only 200 votes versus the winner’s (Hiram Watty) 1330 and the runner-up’s 1124.[23] Several years later in 1906, he was among thirty Baltimore businessmen and citizens signing a petition of support for the Baltimore Terminal Company which was to furnish interurban and suburban service between Baltimore, Annapolis and Washington.[24] He continued his public spirited participation and remained an influential and motivating force in the black community.

During the noon recess of Court on Monday, February 24, 1908, Dickson strolled up Calvert Street and met a cousin whom he had not seen for some time. Still not fully recovered from an attack of the grip, he felt chilly as well as hungry and stepped into Munder’s Restaurant at 311 North Calvert Street to get lunch. As he was eating, he fell to the ground – dead at age 54.[25] Survived by his wife, the funeral took place from his residence at 536 West Lanvale Street. John H. Owens & Sons of 1222 Division Street provided the funeral arrangements for his burial in Laurel Cemetery on Bel Air (Belair) Road.

[11] James F. Schneider, A Commemoration of the Centennial of the Bar Association of Baltimore City, 1880-1980. “Supreme Bench In the Matter of the Petition of Chas S. Wilson for Admission to Practice Law.” Opinion of Court. Filed March 19, 1885.

[19] “Letters of Applications and Recommendations during the Administration of Benjamin Harrison.” National Archives, RG 59, Microfilm 968.

Board of School Commissioners of Baltimore City, Annual Reports

National Archives, Record Group (RG) 59 Letters of Applications and Recommendations during the