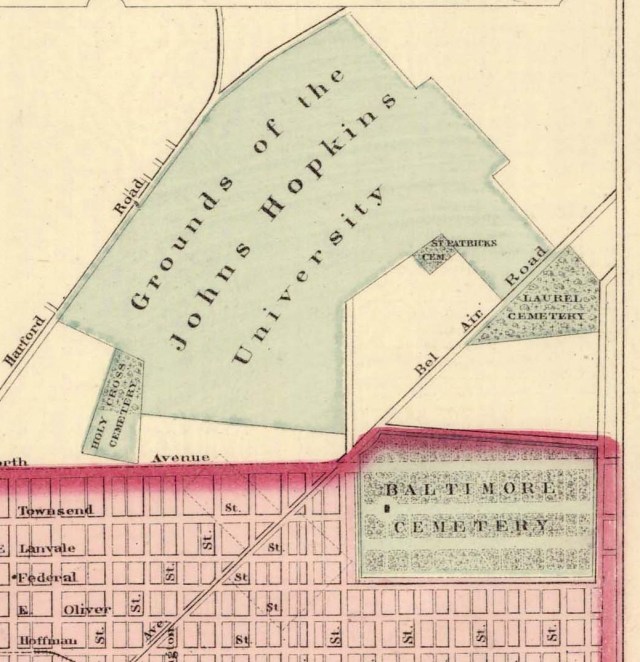 Laurel Cemetery was incorporated on July 14, 1852 “a resting place for colored persons.” Located in the 2300 block of Bel Air Road near a proposed (but not final) location for the Johns Hopkins University, the cemetery consisted of 25 acres with entrances on Gay Street extended and on Eastern Avenue.

The ground is handsomely located, with a commanding eminence, and contains about twenty-eight acres. It will be neatly laid out and surrounded with a permanent wall, with handsome gateways, public chapel, reception room and keeper’s lodge. The great necessity of an appropriate place of sepulture for the exclusive use of the colored population has long been felt, and we doubt not that Laurel Cemetery will in every way supply this want.

The cemetery was the pride of the Black community and was the final resting place of numerous prominent community leaders.

In 1870, military and civic organizations participated in Memorial Day ceremonies in the cemetery honoring Black Union soldiers buried there as well as celebrating the ratification of the fifteenth amendment to the Constitution. An estimated 240 black Civil War veterans were buried in Laurel Cemetery and their graves were routinely decorated for Memorial Day for many years.

In 1886, Issac Jones, a grave digger at the cemetery, was convicted of grave robbing. After his conviction, Jones admitted to robbing over 200 graves and “…that it afforded him much amusement to see the people go out to Laurel Cemetery and plant flowers on graves that had no occupants.”

By the 1920s, the cemetery fell on hard times. The absence of a perpetual care fund meant that fund for the maintenance of the cemetery were insufficient to keep the grounds well-tended. As the cemetery became run-down, neighbors began using the grounds to dump refuse. In time, the city received complaints that the cemetery was a health and safety hazard, being a haven for vagrants and criminals. The cemetery had become so overgrown that family members had to clear a path to visit the graves of family members.

In the 1950s, efforts were made to clean up the cemetery, but a series of legal actions by the city’s Law Department resulted in the cemetery being destroyed without the permission of the legal lot owners. Although the NAACP initiated litigation to preserve the rights of the lot owners, the long legal battle resulted in the closure of the cemetery in 1958 and the removal of a portion of the remains to a cornfield in Carroll County. The land was sold to developers and a shopping center was built on the site. Although an several thousand people were buried at Laurel Cemetery, it appears that only the remains of two hundred were moved to the Carroll County site. It is assumed that the remainder are still buried under the parking lot of the shopping center.

Already several hundred lots have been purchased, and over a hundred interments taken place. In some instances the lots are enclosed with ornamental railings of cast iron, and handsome marble slabs marking the resting place of the deceased.

The body of Morsell was placed in a vault in the cemetery, and remained there until yesterday morning, when it was brought into the city and taken to the residence of his grandmother…. His funeral took place in the afternoon from the house of his grandmother…. The remains were interred in Laurel Cemetery.

Officer Baker says that the robbery of graves there has been going on a long while¸ and such complaints had been made of it and he was instructed to keep a strict lookout for depredators.

The health department has ordered warrants for the arrest of Theodore Locks, colored, an undertaker of East Baltimore, charged with burying a colored child without obtaining a permit; and also for the arrest of the superintendent of cemetery, charged with allowing an interment to be made without the necessary permit. Locks and the superintendent are both to have a hearing today at the eastern station-house.

The adorning of the graves of the colored soldiers in Laurel and Sharp Street Cemeteries was assigned to Lincoln and Guy Posts. In Laurel Cemetery, on the Belair road, there are buried about forty soldiers, and in the Sharp Street Cemetery about thirty.

The throng was so dense around of the doors and stairways [of the church] that the family and relations of the dead man were over half an hour getting into the church, and only succeeded then after the Knights Templar had opened a way through the crowd.