September 2, 1945, a day and a photographer to remember

On September 2, 1945, aboard the Battleship Missouri anchored in Tokyo Bay, the Japanese surrendered ending the War in the Pacific and bringing to an end World War II.

The ship was crowded with official visitors and resident seamen. Following the ceremonies a photographer captured Admiral Halsey and Vice Admiral McCain (Senator John McCain’s father) in conversation. In the background in the open door of a turret can be seen an official Navy Photographer who is thought to be Harold Ignatius “Buster” Campbell (1922-1966).

From that vantage point a number of photographs of the official signing were taken including of General Yoshijiro Umezu, chief of the Japanese Army General Staff, with General McArthur looking on. 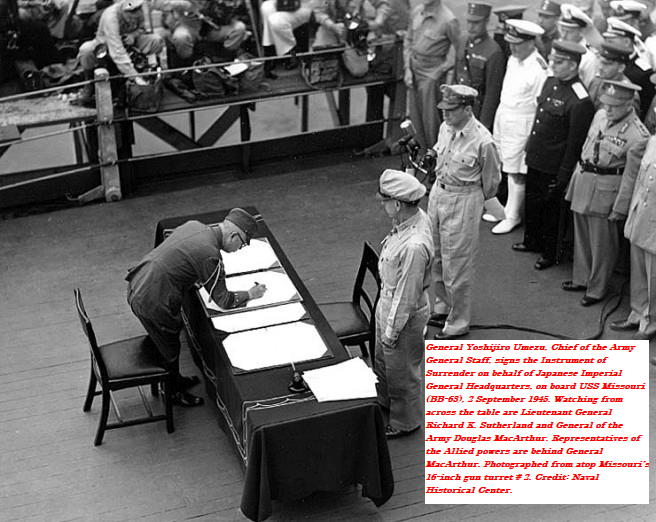 Buster Campbell was only a Baker’s Assistant aboard the Missouri, spending most of his working hours preparing donuts and other baked goods for consumption by the 2700 men on board. In his off hours he learned to be a photographer and became so proficient that on September 2 he was given the prestigious assignment of being one of the official photographers of the ceremonies. As he explained to his wife in a letter dated 1930 hours, Sunday September 2, in Tokyo Bay:

“...today will no doubt be the greatest in my naval career. ...I was a ship’s photographer for the surrender ceremony and what a time I had. Took 63 shots from beginning to end. gee I was lucky. Pat developed half my stuff and he said they were very good. I sure hope so.

Because the photographs taken by the official photographers at the time were not credited to individuals, it is not certain which ones were taken by Buster, but it is most likely to have included the view of General Umezu and several others of the signing taken from the perspective of turret #2.

This was not the first time that Baker’s Assistant Campbell impressed the photographic staff with his ability to use a camera. His best known photograph was the of the Kamikaze attack on the Missouri at the battle of Okinawa, although he did not get official credit for it until long after his death in 1966.[2] 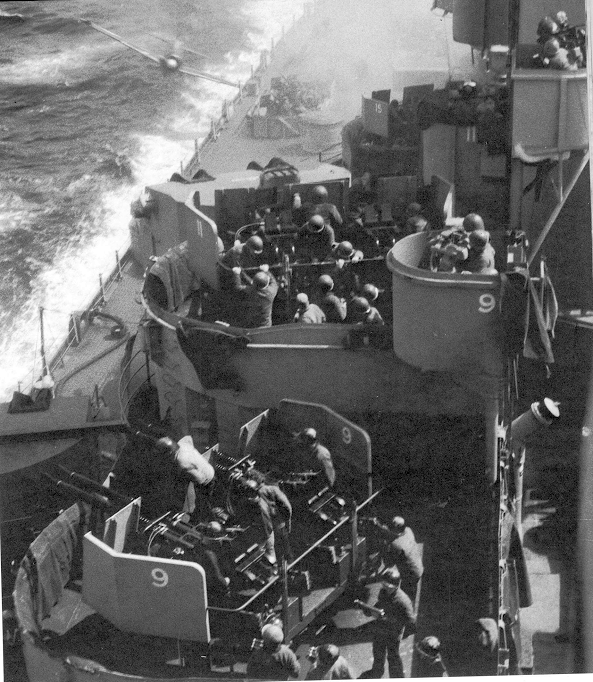 When Buster’s son learned that another photographer had been given credit for the Kamikaze photograph, he corrected the record by sending https://www.ussmissouri.org/copies of Buster’s diary documenting how he came to take the photograph along with other of his father’s memorabilia relating to his service. Included was an unmarked up copy of this photograph taken of Buster with his official Navy Graflex Camera.[3] When the Sun papers received this official photograph from the Navy, they cropped it and prepared it for publication in the Evening Sun of October 4, 1945, noting on the back “Sept 2nd 1945 Just after the surrender was signed.”[4] 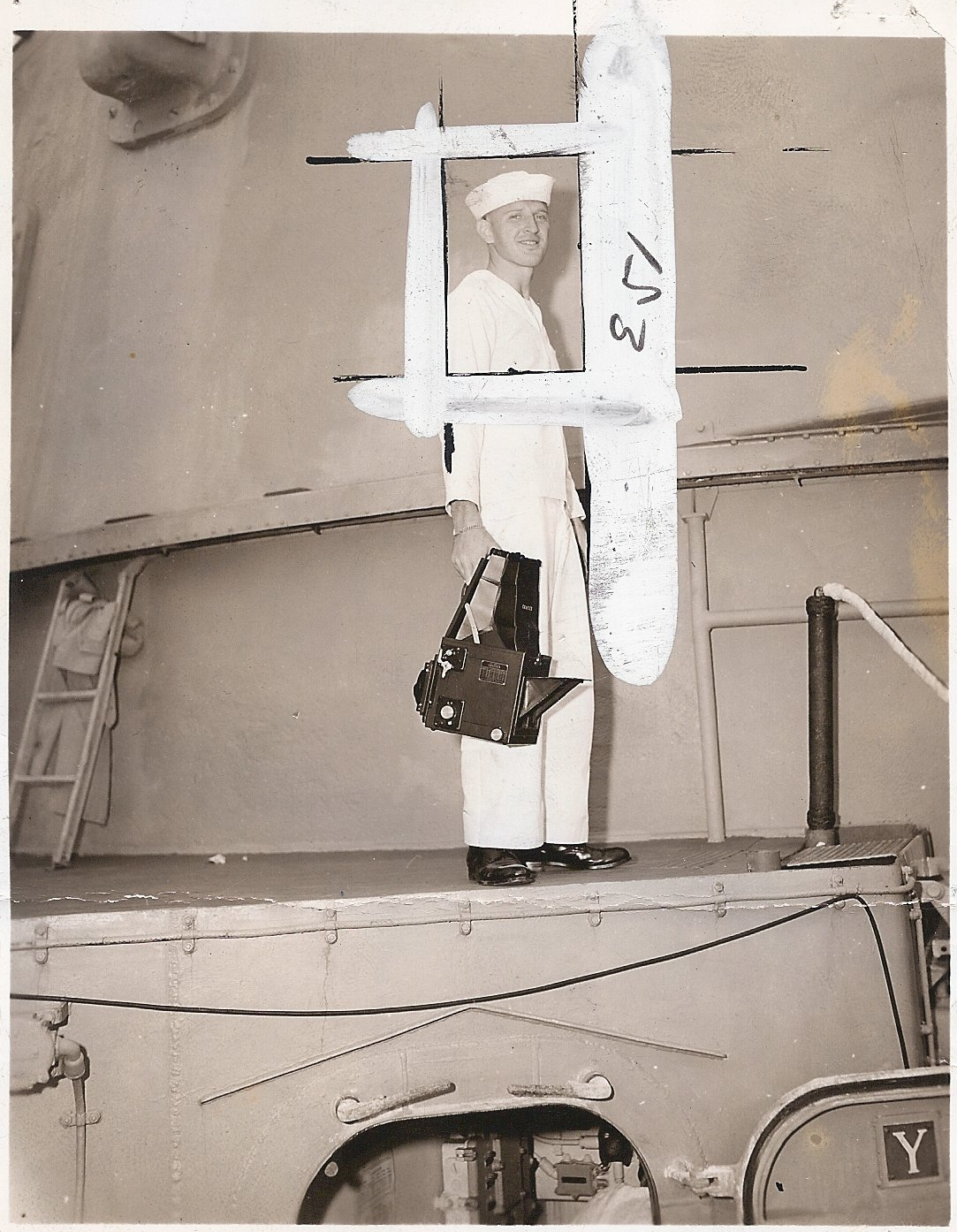 Buster grew up at 1720 West Lombard Street in the parish of 14 Holy Martyrs. The church, which is still standing, is said to have been designed by George A. Friederick and built after 1870.[5] By 1964 its parishioners had moved away and the church was closed, reflecting the white flight to the suburbs and the racial strife confronting the city. The John J. and Nora Campbell’s family acquired the house in 1925[6]

which was less than a block away from their church

and the parish school their children attended. 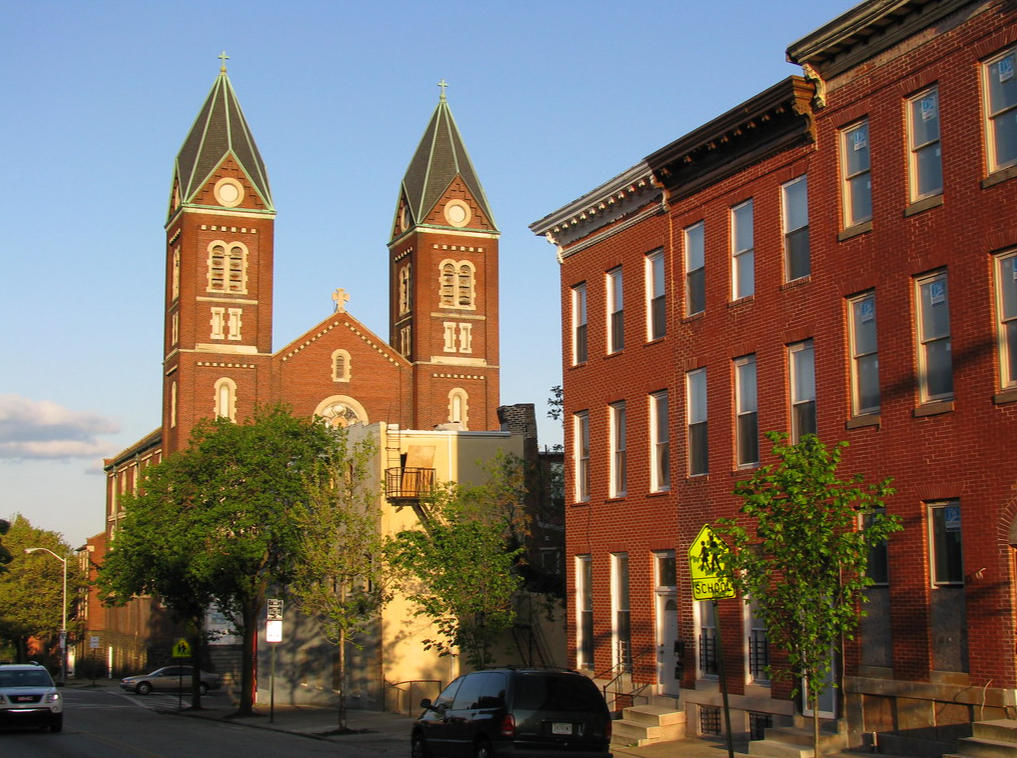 Buster was one of seven World War II servicemen who grew up at 1720 West Lombard, and are seen here celebrating Christmas in February 1946 when all were at last safe at home from the war: 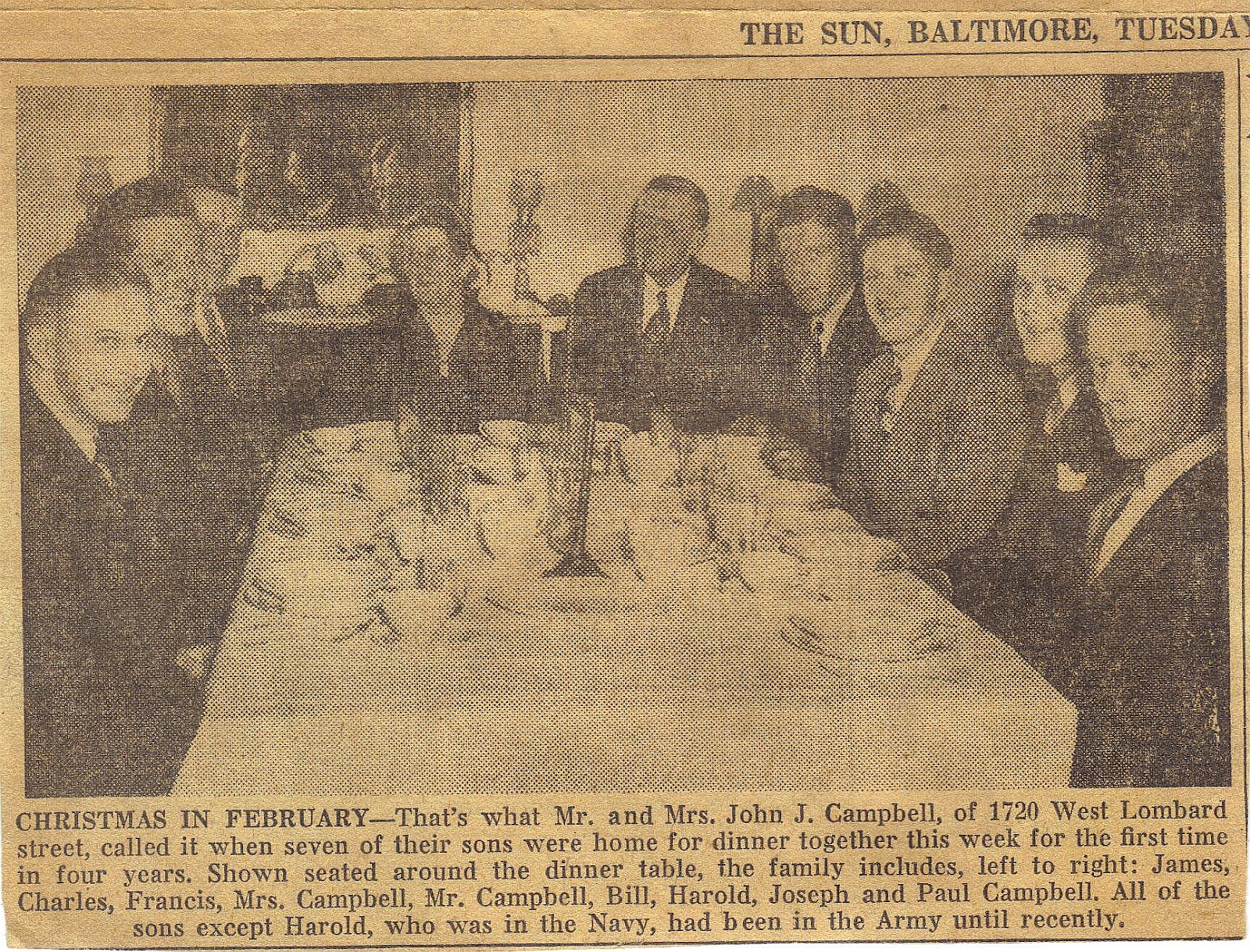 When Buster entered the Navy he had been working as a sign painter, having graduated from the Maryland Institute night school class in lettering in 1940.[8] On his return Buster went to work for the Air Engineering firm and by 1959 was employed by the United Glazed Products of Baltimore whose headquarters were in Lansing Michigan. Buster died suddenly of an apparent heart attack in 1966 at the age of 43, just before boarding a plane in Lansing to fly to Baltimore to visit his family. In December 1965, he had been named general manager of the tile products company and was contemplating moving his wife and son to Lansing.[9]

Today Harold I. “Buster” Campbell and his wife Thelma, rest in Baltimore National Cemetery along with many of Baltimore’s veterans and their wives, including James and Hattie Carroll. If Buster represents how one high school graduate from Baltimore was able to make the most of his Naval service and then, after the war joined the white flight from the City to the suburbs and beyond,, along with the congregation in which he grew up, veteran James Carroll’s wife, through a ballad written by Bob Dylan, became the symbol of white oppression in a segregated city that Buster left behind. Today all four lie quietly in graves not far from each other.

the graves of Harold and Thelma Campbell, and of James and Hattie Carroll

Much more could and should be written about Buster Campbell, his family, and his parish as well as the family and neighborhood of Hattie Carroll.

Buster’s is the story of an industrious German Catholic family in a long lost and forgotten neighborhood of Baltimore, whose life stories are not unlike a Barry Levinson film[10], while Hattie and her family’s equally important story is largely unknown, and even the memory of Bob Dylan’s ballad is fast fading from the public consciousness.

Today, however, we return to one of the most significant days in World History to celebrate the event Buster documented, and to mark his achievements as a skilled photographer who left behind an archive of visual images of a day we ought not to forget, September 2, 1945.

[2] an article in the February 25, 1945 edition of the Baltimore Sun noted “All the Campbell servicemen were in the Army except harold, 24, who was in the navy, assigned to the Missouri at the time of the surrender. His chief job was baking, but when called to his battle station, harold would hurry from his cakes and pies and take up a camera, ready for his other job-- assistant photographer of the ship. One of his shots, a view of aq kamikaze attack on the Missouri recently was shown in New York in an exhibit of “the 100 most famous pictures of the war.”

[3] according to Bruce Thomas, an authority on Graflex cameras (see: http://graflex.coffsbiz.com/milhistory.html), Buste’s “camera would be a 4x5 Graflex RB (Revolving Back) Series D, equipped with a Bag Magazine on the rear for 12 exposures without reloading. It also appears to be a brand new 1945 model”.

[4] the cropped image does not appear in the online images of the Sun or the Evening Sun of October4, 1945 which are on http://newspapers.com although it may of appeared in a late edition of either paper which has not been preserved.

[5] The church was established in 1869 by the rector of St. Alphonsus Church. His goal was a new German Catholic Church to service the German Catholics in the west Baltimore area. The building was erected at the corner of Mount and Fulton Streets. In 1870 the upper part served as the church while the lower part served as the school. The corner stone was laid on July 10, 1870. The church was served by the Redemptorist fathers of St. Alphonsus for a short time, but in the spring of 1871 a secular priest took charge of the church. On the first of April, 1874, Rev. Meinard Jeggle of the Benedictine order was appointed pastor. A cornerstone is dated 1902. Fortunately the records of the Church and its parish have survived. They are available from the Maryland State Archives on microfilm (MSA SC 1190, SCM 2650-SCM 2651. Source: https://www.germanmarylanders.org/churches/church-of-the-fourteen-holy-martyrs, text based on History of Baltimore City & County; John Thomas Scharf, 1881, J.B. Lippencott & Company, publishers, Philadelphia PA.

[7] In an accompanying article about the family, Mrs. Campbell is quoted as resisting the desire of a younger brother, Jerome, to enlist, telling the reporter that “bringing up 14 children and seeing half of them successfully through the war is enough excitement for one family.”

[10] Diner was the first of four films set in the Baltimore of Levinson's youth. The other three were Tin Men (1987), a story of aluminum-siding salesmen in the 1960s starring Richard Dreyfuss and Danny DeVito; the immigrant family saga Avalon (1990) featuring Elijah Wood in one of his earliest screen appearances, and Liberty Heights (1999). See: https://en.wikipedia.org/wiki/Barry_Levinson