Ernie Dimler is a man on a mission. Ernie is a collector of glassware related to 19th and early 20th century industry in Maryland with an emphasis on drug companies, drugstores and apothecaries. He has the conscience of an Archivist and a Conservator who wants to display, and accurately interpret and care for his collection.

Ernie maintains a fascinating museum atop the Bromo Seltzer Tower in Baltimore where he displays his blue bottle collection and tells the history of the man who built the tower while curing Americans of the their headaches, a man who owned the Emerson Hotel where Woodrow Wilson stayed when he was nominated for President of the United States. In the course of seeking out the documentation of the Emersons, and the bottle and related industries in Baltimore, Ernie ran across a trove of documents on Ebay that were from a large collection of Baltimore City records acquired by a well-known local collector, Whitey Mansberger, in the 1970s (40 bags for $50). Whitey’s life was well chronicled in the Sun and the Evening Sun by such well-known reporters as Earl Arnett, Douglas Birch, Jacques Kelly, Michael Olesker, Isaac Rehert, Fred Rasmussen, and Tracy Rozhon.[1] Sadly the City refused to purchase the documents back from Whitey and they were sold to collectors all over the country only to begin re-appearing on EBAY in recent months. 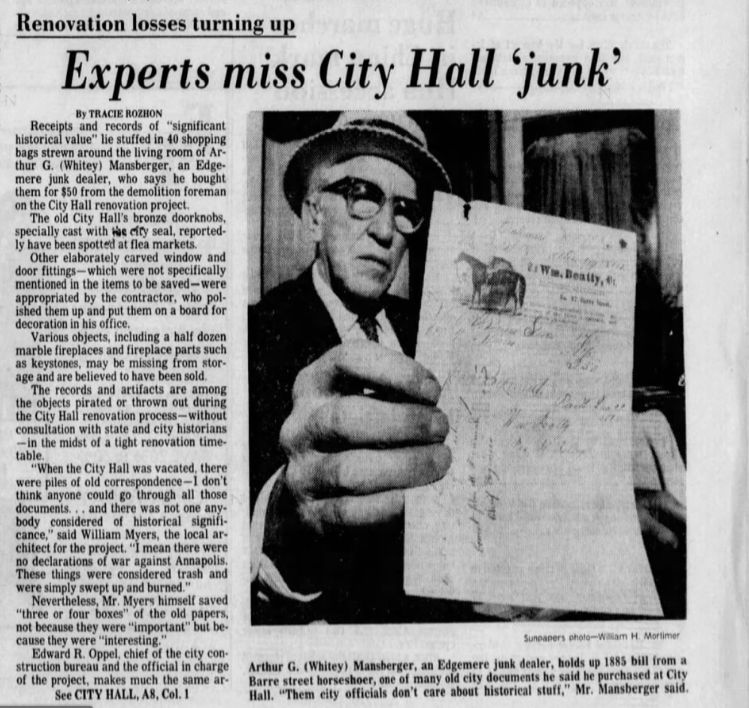 What Ernie has acquired so far includes the details of the City’s contracts for repairing the city schools (white and ‘colored’), garbage and waste collection, details of contracts with the Water Board, and many letterheads and checks issued to individuals who had business with the city including providing goods and services to Bayview Hospital, all dating from the late 1860s to as late as 1901.

In the course of casting his net, Ernie has also captured some remarkable items relating to the city’s history including what is likely to prove a very rare and valuable letter from a Free Black living and working in Baltimore from at least 1840 until after 1850. The letter is written by G[eorge] Osborn, Baltimore, to Bennett Osborn in Harford County telling him that there is no market for his ‘axeltrees’. An axeltree is made of wood or iron (the first iron axeltrees were patented in England in 1695) and are the principal axles that run between the wheels of a carriage or cart. While he could not sell the axletrees, Osborn did buy the saw Bennet wanted and billed him for it and its freight to Harford County. The details of George Osborn’s life are to be found in the census records for Baltimore City and the City Directories between 1840 and 1850. Presently it is not known what happened to him and his family after 1850, but ‘colored’ Osborns continue to appear in the City directory in the neighborhoods where George lived.

If the identification of the author of this letter is correct, it is a very rare item that documents the literacy and the entrepreneurship of a Free Black in Baltimore before the Civil War. While there are several very good secondary works by historians Bettye Gardner, Ralph Clayton, Hilary J. Moss, Christopher Phillips, Seth Rockman, Stephen Whitman, and more recently Martha S. Jones, concerning the community as a whole, little has been written about the lives of individuals and their families who formed the core of the Free Black population from carters, caterers, and domestic servants to night soil workers. Letters like this along with the in depth studies of neighborhoods from the family, tax, probate, land, and legal records provide the opportunity to not only know more, but to better understand the manifold contributions the Black community made to Baltimore’s story.

As to the recovery of the Mansberger collection, Ernie Dimler deserves high marks for his devotion to and investment in retrieving what the City allowed to be thrown away of its history. Buried in the details of those records are the interactions of named individuals who had business with the city, a history that is not only of interest to their descendants, but to those who wish to know about the services that the city provided from water to waste removal and school construction for both black and white in an increasingly segregated city following the Civil War.