Rebuilding Baltimore After the Great Fire of 1904:

The history of block 1351 and the neighborhood of which it is a part reaches back to the founding of Baltimore Town in 1727. In that year Conra(o)d Smith died leaving a brick house or tenement which, in 1778, was sold to Peter Frick in a deed witnessed by the first mayor of Baltimore under the charter of 1797, James Calhoun.[2] Peter Frick was china-merchant, director of the Union Bank, and in 1801 was president of the first branch of the Baltimore City Council.[3] Peter Frick’s Gay Street house was on the lot on block 1351 that today is 17-19 South Gay Street, better known as the Lobe building. From the Baltimore city directory for 1804 it is possible to gain a snapshot of Peter Frick’s neighbors and their occupations:

On Monday morning, February 8th, 1904, at about 3 a.m., block 1351 was consumed in the great Baltimore Fire and the commercial world that had evolved on the block since the days of Peter Frick went up in smoke.[4] The disruption to business caused by the fire can best be seen from a neighborhood standpoint with the Baltimore City Directory for 1904.[5] For example take those who had offices or businesses in the buildings at 15 through 23 South Gay, and at the bank building at the corner of Water and Gay, no. 33 where there had been a financial institution since at least the early 19th century. 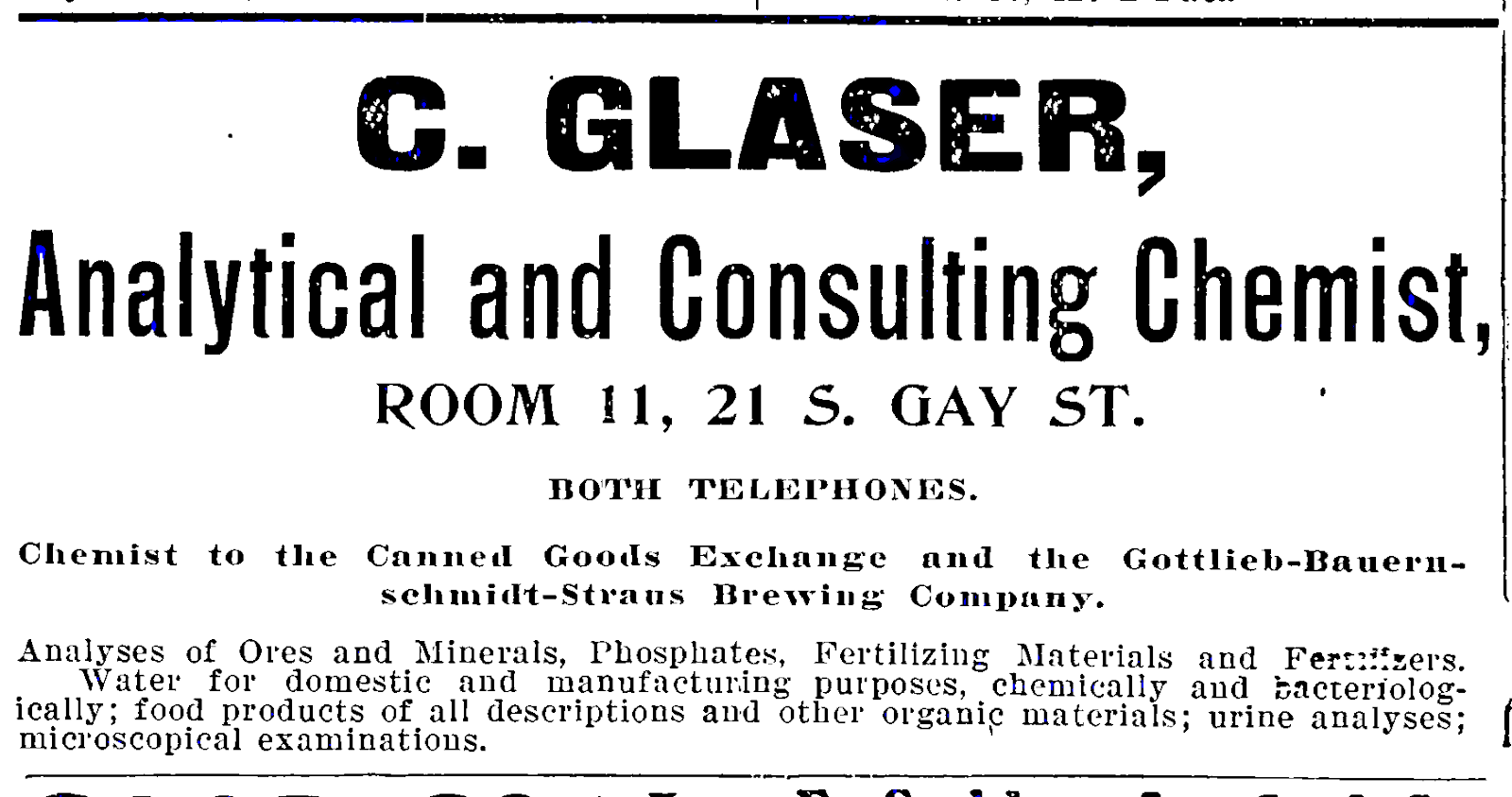 Board of Marine Surveyors and Port Wardens, 33 s Gay

In terms of the stories that might be told of the businesses housed in the buildings on Block 1351 at the time of the fire, perhaps the most intriguing might be that of the Old Grandfather's Advtg Clock Co, 19 s Gay. The owner, Robert S. Wiesenfeld, proved to be quite a character and is featured in a curious article published in the Sun in 1916: 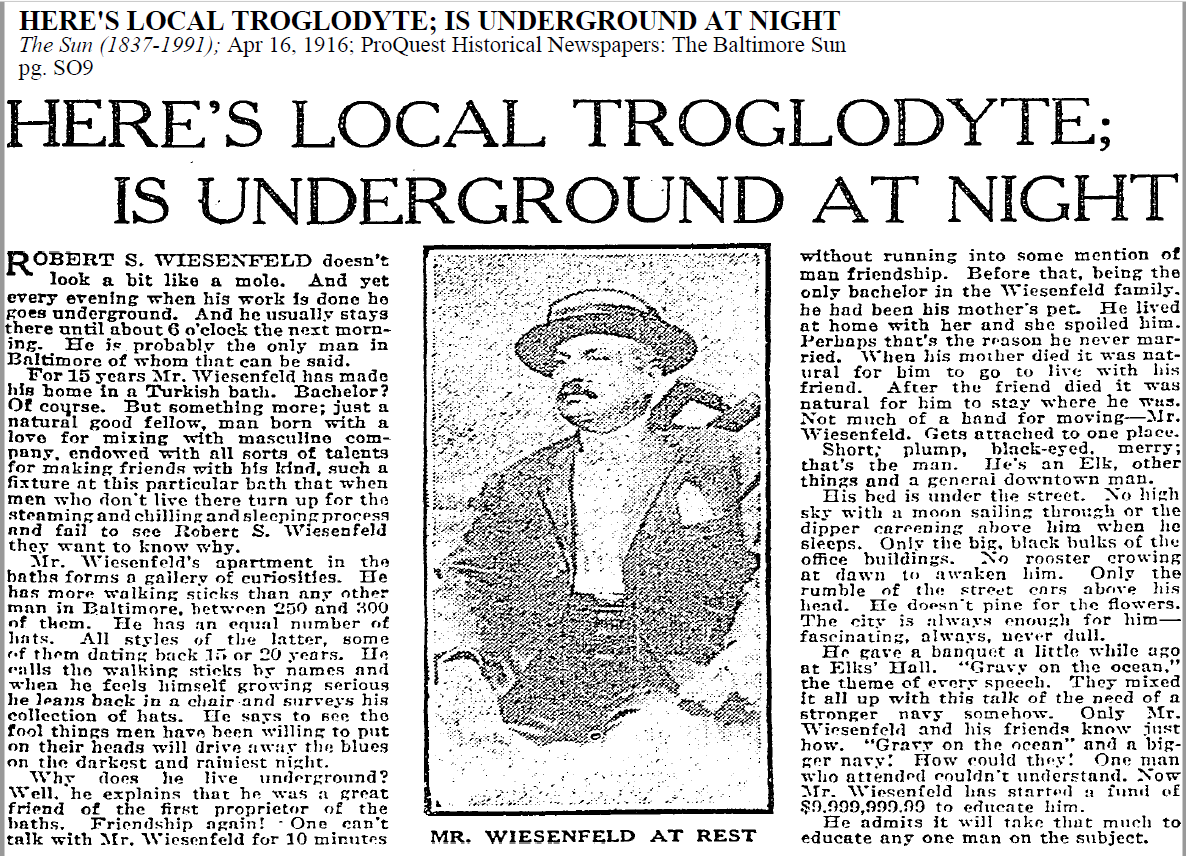 In 1904 he may have been selling Sessions Advertising Clocks, such as this one which may date from about that time: It is possible that Wiesenfeld was in trouble by the time of the fire or perhaps was ruined by it, as there appears to be a court case he lost among the records of the Superior Court of Baltimore City for April of 1904.[7] He does not reappear as a tenant at 17-19 South Gay in the city directories.

Recovering from the fire was a demanding process. It may have been one of reasons Mayor Lane committed suicide.[8] As to Block 1351, two entrepreneurs competed to build their office buildings as quickly as possible. The first to be completed may have been the Sexton Building at 5-9 South Gay which was announced briefly in an article in the Sun entitled “Owners Tired of Waiting.” “The Sexton, Stove and Manufacturing company, 5, 7, 9 South Gay street, has planned to erect a five-story brick office building, with two storefronts on the first floor. Jas. Stewart & Co. are the builders and J. E. Sperry the architect.” The Sexton Building was available for occupancy by May 1905 when it was illustrated in the American Architect with a “For Rent” sign prominently displayed.[9]

Rebuilding after the fire could be stressful and was said to have contributed to Samuel B. Sexton’s death in November, 1904, before his building was completed:

Next door at 15-19 South Gay Street, the Napoleon B. Lobe building was nearing completion as well.

On April 7, 1904, a month after the fire began, the Baltimore American published an article headlined “Fogs of Dust in the Burned District. Clouds of Stifling Particles make the Workmen Look Like Millers” which featured a prospectus of the new Lobe Building at 15-17 South Gay Street:

On April 10, 1904, the Sun carried a drawing by the Architect, George Clothier, Jr., of the facade of the Lobe Building followed by a short article about the City’s financing its contribution to the re-building from the sale of the City’s stock in the Western Maryland Railroad:

The Manufacturers’ Record for May 26, 1904 provides a more detailed account of the revised plans: 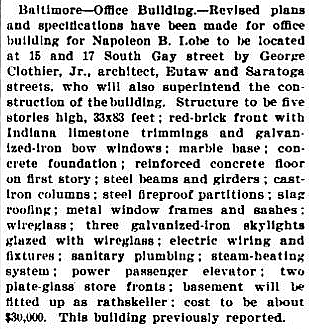 On April 2, 1905, the Sun announced that the Lobe Buildings was completed and had offices to let. It was furnished with all modern conveniences including an electric elevator, the first version of which had been installed in Baltimore in 1887. [10] By 1912 the building was fully occupied including a resident physician (Dr. Frank Bayne), several manufacturing and foreign product brokers, a moving picture supply company (G Kingston Howard) and Wiley & Company, analytical and Consulting Chemists who occupied the entire top floor.[11]

By 1916 G. Kingston Howard was president of the Baltimore movie Operator’s Union, local 181, fighting a bill in the Maryland legislature that would establish a Movie Censorship Board. He failed and the Board continued to censor movies until 1981.[12] 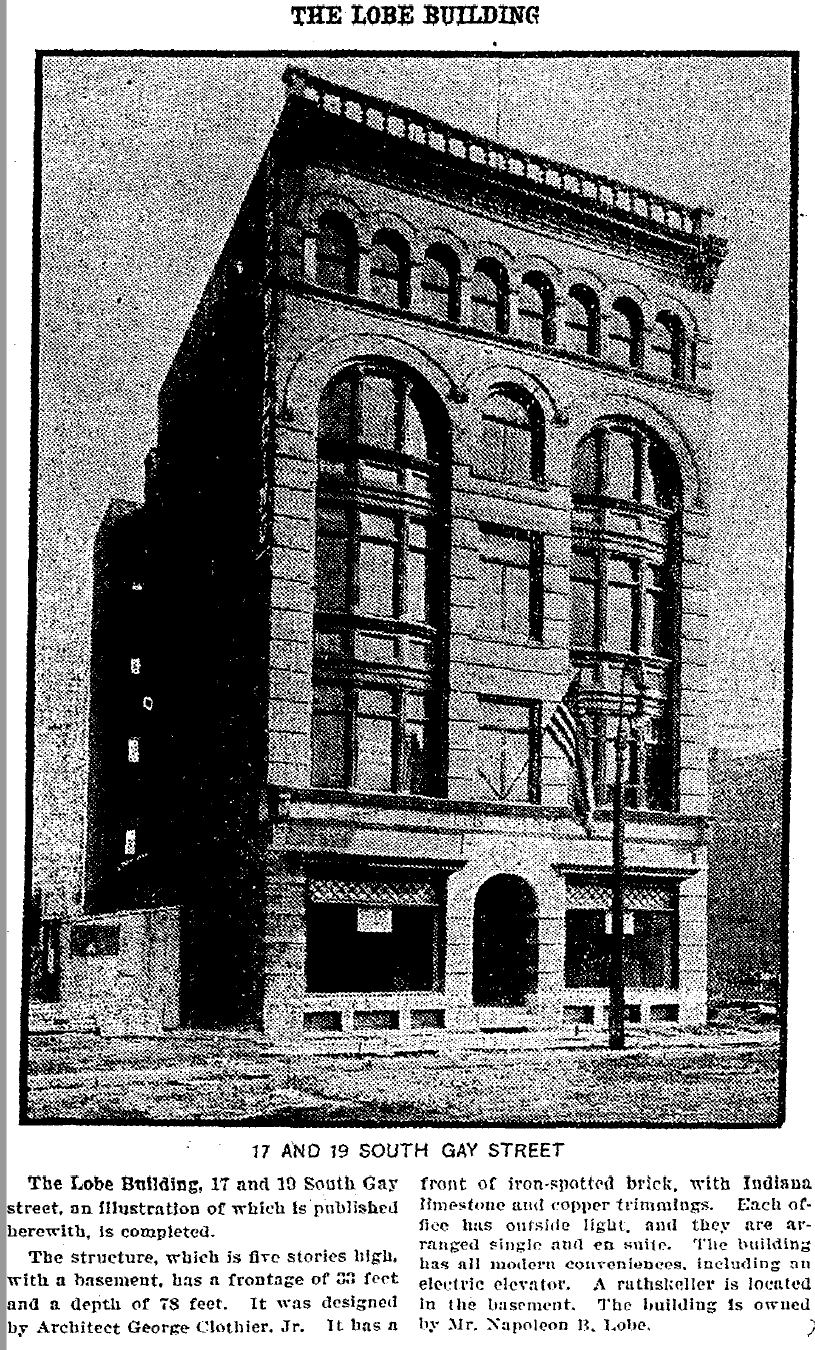 Little is known about George Clothier, Jr., the Architect of the Lobe Building, apart from 11 projects in and around Baltimore that were documented by John McGrain and reported to the curator of the Dead Architects Society, James Wollon.[13] There whereabouts of his papers and his drawings are unknown.

Napoleon Bonaparte Lobe (1864-1938) on the other hand, is well known. A Republican who ran unsuccessfully for public office including Congress, he was best known as an Auctioneer: 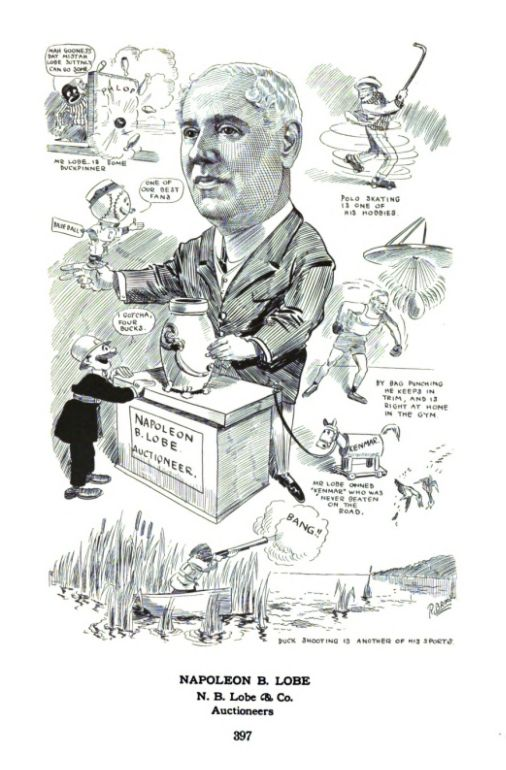 From: Club Men of Maryland in Caricature: Drawings by Ray O. Evans and Associates,

Napoleon B Lobe acquired the lot and rubble of 17-19 South Gay Street from his siblings and the other heirs of his father, Isaac Lobe, officially on April 28, 1904.[14] The lot had been his father, Isaac Lobe’s property since the year of Napoleon’s birth, 1864, and now he sought to turn the disaster of the fire to a profit by erecting a fine new office building on the site.

A biographical sketch appeared in 1910:

Son of the late Isaac and Esther Eytinge Lobe, [Napoleon B. Lobe] was born in Baltimore City on the 3d day of October, 1864. He attended the public schools and City College of Baltimore City, and is at present [1910] a member of the firm of N. B. Lobe & Co., auctioneers and wholesale carpets and mattings. Mr. Lobe attends the Madison Avenue Temple, and is a member of the Phoenix Club, Union League Club, the Travelers’ and Merchants’ and the Merchants’ and Manufacturers’ Associations. On April 10, 1902, Mr. Lobe married Miss Mae F. Burgunder and has two children, Esther B. and Napoleon B., Jr.[15]

To this might be added that when his mother died in 1923 at the age of 101, her obituary noted that she had emigrated from Holland, was the daughter of a Baltimore merchant, and had married his father in 1845. Besides Napoleon, she was survived by his two sisters, one of whom was the mother of the Democratic Attorney General of the State, Isaac Lobe Straus. The family covered its political bases well.[16]

In addition to being a developer and an Auctioneer, Napoleon B. Lobe was also an early venture capitalist who invested in the inventions of others. One of the patents he owned was for a device for fastening advertising to the backs of street cars. It would be interesting to know if it was used on the streetcars of Baltimore. 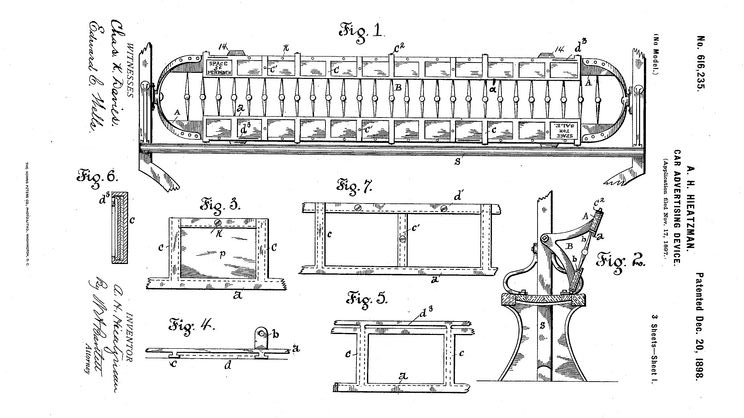 Napoleon B. Lobe died on May 14, 1938. He was buried in Baltimore Hebrew Cemetery. Oddly enough there was no obituary in the Baltimore Sun.[17]

By the time of his death, the Lobe Building had passed out of his hands, and was known as the Seabord and then Mazur building[18]

From the City Directories, a good idea of the businesses on Block 1351 over time can be determined. The sample that follows is taken from the directories at the Baltimore City Archives which are not yet online. They focus on the addresses on South Gay Street from Baltimore Street to Water Street (originally called Second Street) and include both the West (even numbers) and East (odd numbers) of the street. Note the name changes of the Lobe building to Seabord and then to Mazur. 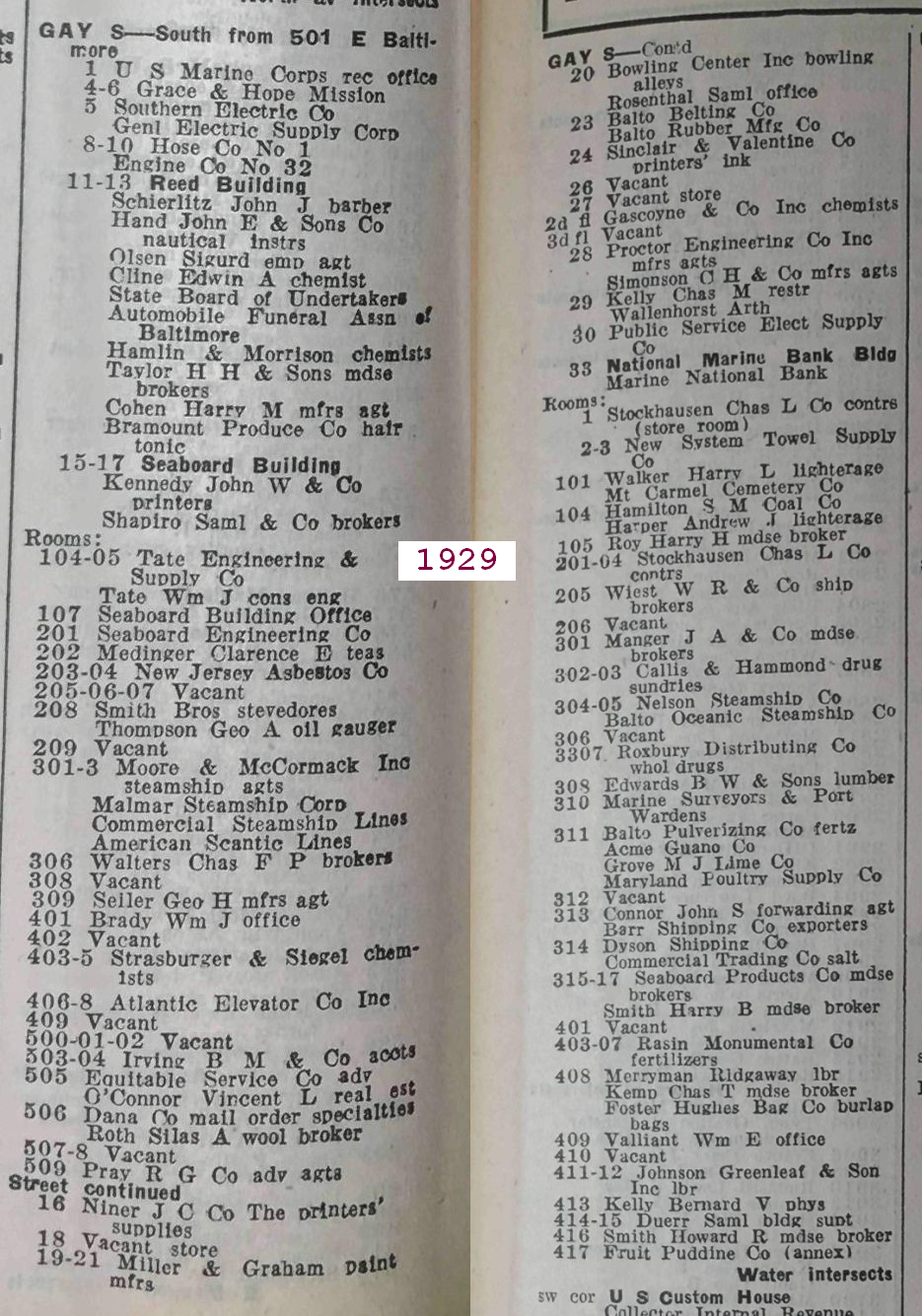 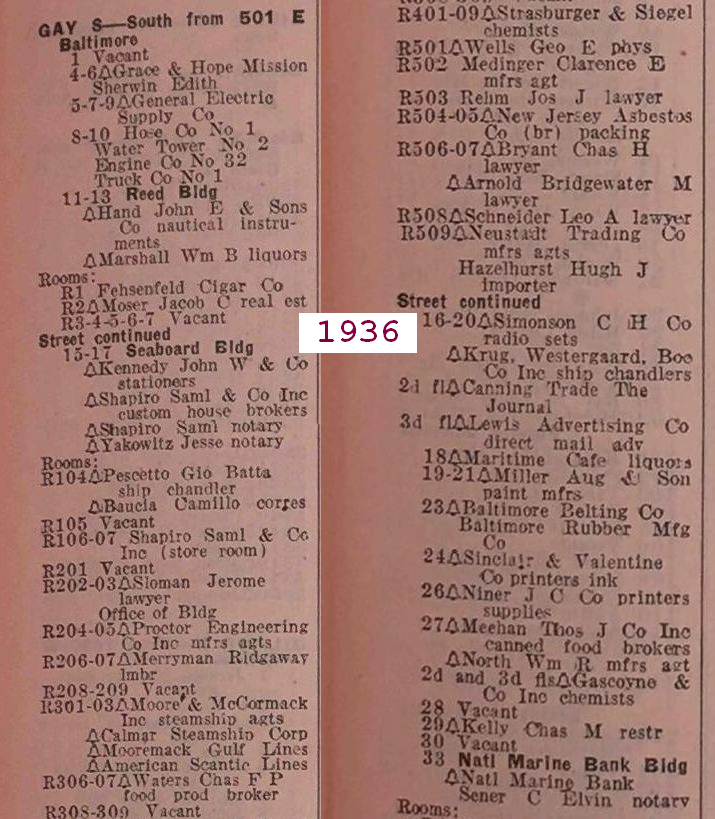 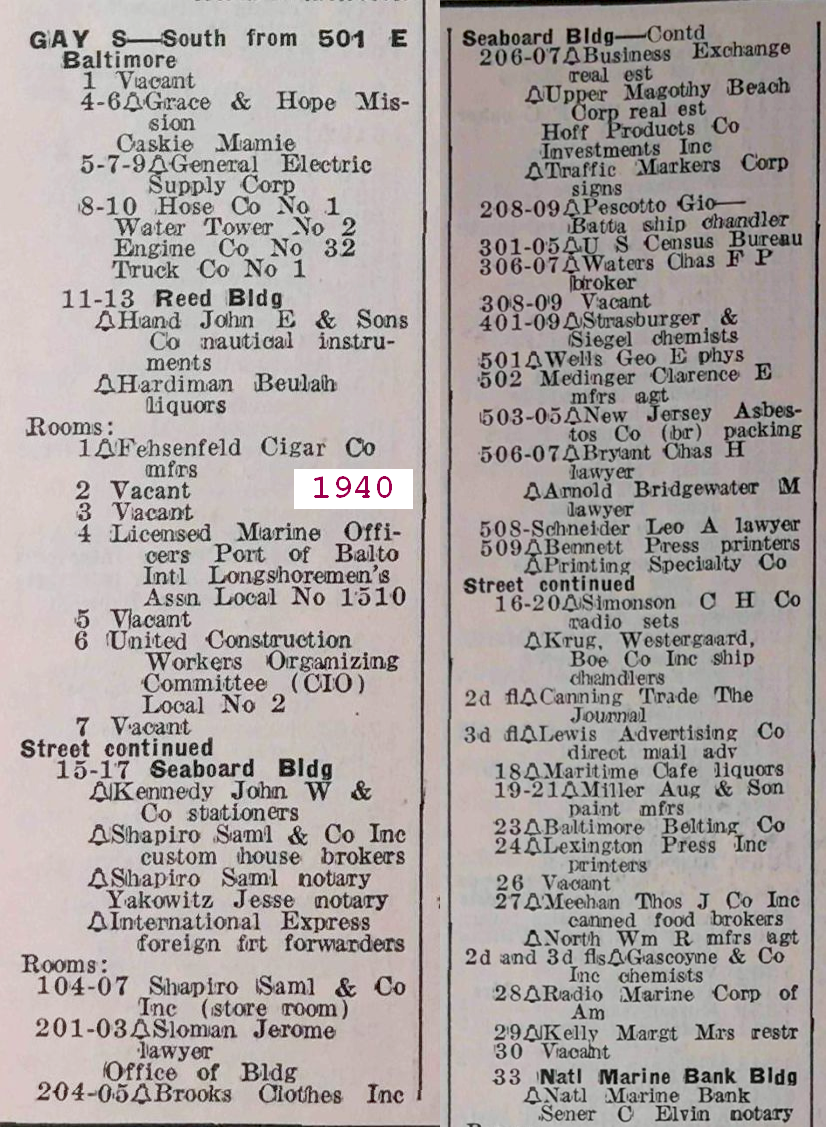 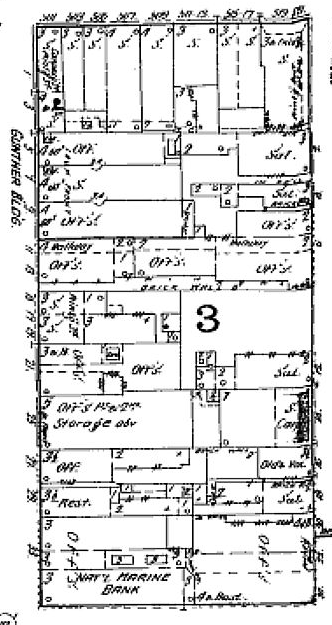 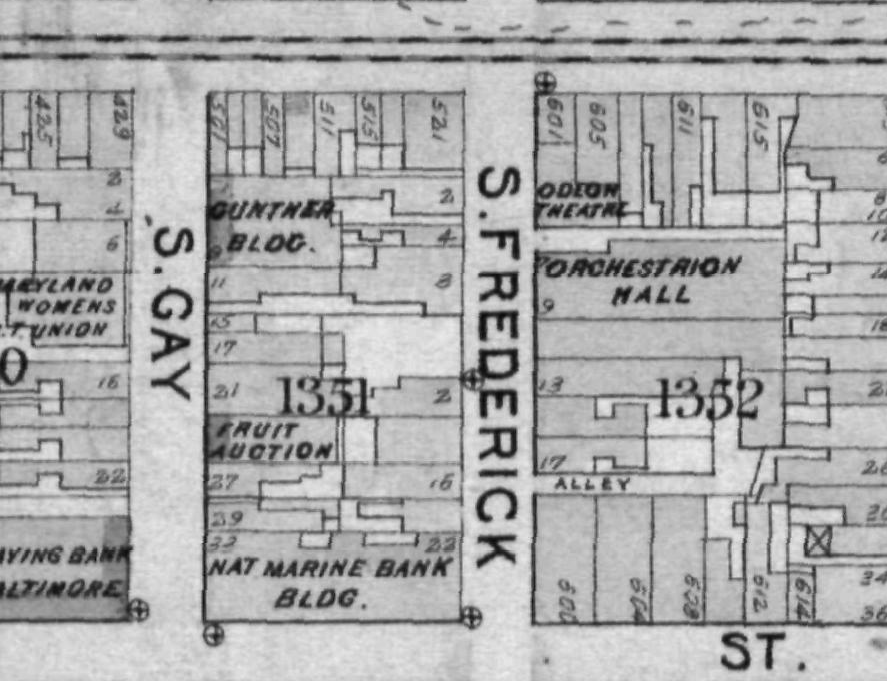 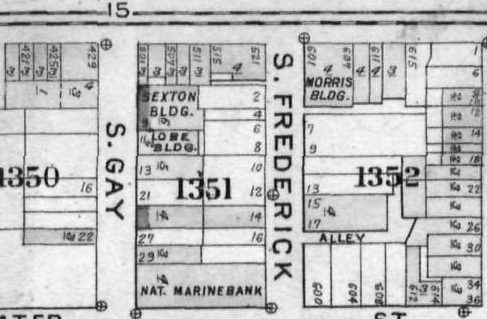 [1] Baltimore City is the only jurisdiction in Maryland that indexed its deeds by block. The base map for numbering the blocks was the updated (1851/52) version of Thomas Poppleton’s map of Baltimore City. For the story of Poppleton’s map see: http://www.thomaspoppletonsbaltimore.net/2015/10/thomas-poppletons-surveyors-map-that.html

[3] For Peter Frick see the newspaper index on Genealogybank.com and the Proceedings of the City Council, First Branch, at the Baltimore City Archives. The title to 15-17 South Gay Street reaches back to Peter Frick from Baltimore County Court (Land Records) TK 286, ff. 383 available on http://mdlandrec.net.

[4] See the maps and brief narrative at http://digitalmaryland.org/fire

[5] https://archive.org/details/rlpolkcosbaltimo1904rlpo. The directory is searchable by street which permits a compilation of the occupants in the neighborhood who were displaced and, for those who remained open for business, where they were temporarily located.

[6] Taken from the 1904 Baltimore City Directory which was compiled after the fire. As the introductory explained, “As the fire of the 7th, 8th, and 9th of February last, destroyed all of the sheets of the Baltimore City Directory for 1904, which was very nearly completed … we were compelled to recanvass the whole burned district ...The alphabetical portion of the Directory has the permanent or temporary location of most of the parties that were burned out.

[10] Transactions of the American Society of Civil Engineers, 1905, Volume 54, Part 2, p. 134. In 1884 William Baxter, Jr. invented an electric elevator using direct current which he installed in a building in Baltimore in 1887, the first of its kind. To determine how many of the former occupants returned to the new building, an assessment needs to be made of the subsequent city directories. Until 1929, there were no cross street sections to the directories, but the directories for 1905-1923 are available as searchable pdfs on http://archive.org. A well organized site that makes access to the directories and to the mapping of the city easy is http://map-maker.org. Hopefully it will remain on line for years to come and not suffer the fate of so many useful web sites that have appeared and then disappeared for lack of institutional support or institutional carelessness.

[17] Further searching in the American which is only on microfilm, or the Jewish Times obituary files at the Jewish Historical Society, might yield an obituary. The summary of his probate records are online at http://familysearch.org as well as his will. The originals of his inventory and accounting for the disposition of his estate are at the Maryland State Archives in Annapolis, but are not online.

[18] the search for the sale of Napoleon Lobe’s interest in the Lobe Building requires either a deed reference to the conveyance of the building to the City or a time consuming search through the grantor/grantee indices of http://mdlandrec.net for Baltimore City. By 1932 according the the Sanborn Insurance maps, the building’s name was changed to the Seabord/Reed Building (see Volume 4, plate 319, Sanborn Atlases, Baltimore City Archives). Much more could be done with the owners and occupants of Block 1351, both before and after the fire. An indication of who the occupants were after the fire and how the property appeared on the Sanborn and Bromley maps from the 1880 until 1953 follow. Note that the title search for the Lobe building is complicated by Lobe’s acquisition of a right of way for a sewer line. For example see: Baltimore City Superior Court (Land Records), SCL 4302/458 and referenced deeds.

[19] The Sanborn maps do not carry the block numbers, but the Bromley atlases do. All the images of the Sanborn and Bromley maps are taken from my draft atlas unless otherwise noted; See: http://mdhistory.msa.maryland.gov/msaref07/html/index.html. See also http://map-maker.org/Helper/maps/index.html provides easy access to the atlas and other maps of the city.